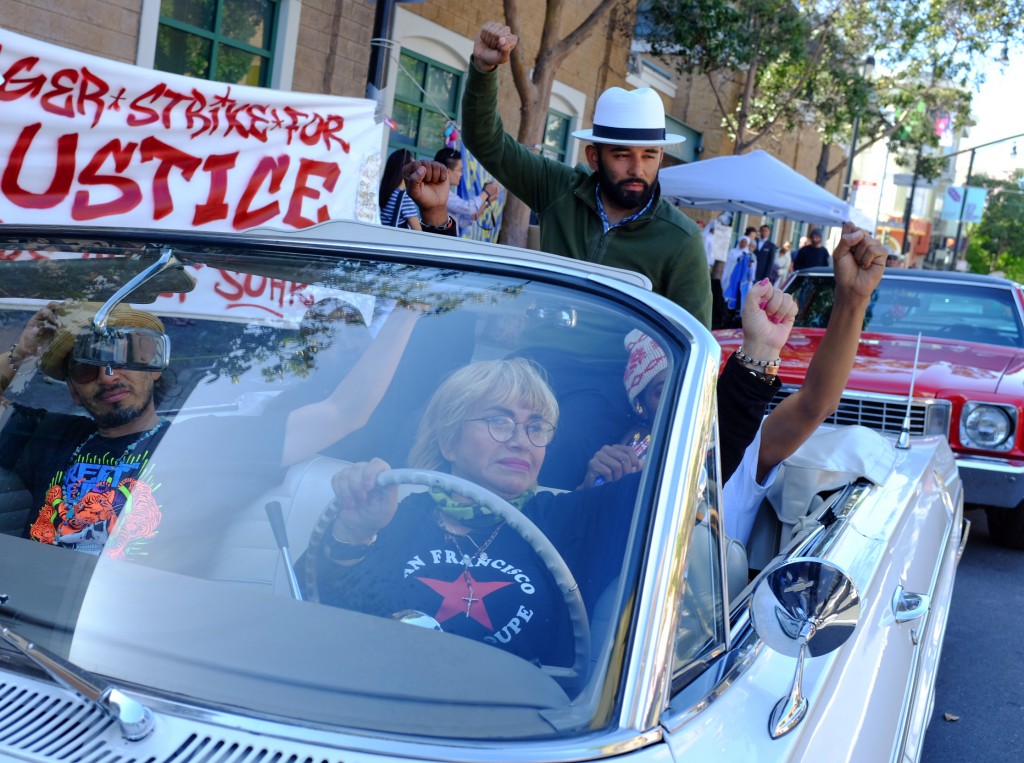 The “Frisco Five,” a group of people on hunger strike outside the Mission Police Station, are cheered on by lowrider drivers and supporters, Sunday, May 1, 2016 in San Francisco, Calif. Maria Cristina Gutierrez, age 66, is seen at the wheel with her 42-year-old son Ilych Sato to her right. Edwin Lindo, age 29, is seen sitting on top of the car and to his left, Sellassie Blackwell, 39, and 42-year-old Ike Pinkston (to Lindo’s right). (Photo by Santiago Mejia/ special to The Guardsman)

The thundering grumble of lowriders ignited the street corridors of Valencia Street as a procession of the restored marvels were brought to rest in front of the Mission Police Station on May 1 in support of the ongoing hunger strike.

Benjamin Bac Sierra, a City College English teacher and active member of the Mission District’s lowrider community, led the caravan of “lowrider bombs” from the Cinco de Mayo “Give Something Back Car Show” at John O’Connell High School to the Mission Police Station in an act of solidarity with the five activists who are starving themselves to demand the resignation of San Francisco Police Chief Greg Suhr.

“Black and Brown never let us down!” Bac Sierra called out to the crowd in reference to the communities united against police violence. “Lowriders take over the Mission Police Station! Viva La Mision!”

The five hunger strikers, now known as the Frisco Five, clambered into a cream-colored 1964 Chevrolet Impala and raised their fists as hydraulics bounced them to and fro. “We came here to show them love. They are my heroes. The last time I saw someone do a hunger strike was Cesar Chavez,” Roberto Hernandez said, the Impala’s owner and the president of the San Francisco Lowrider Council.

The lowrider cars parked in the red zone where 15 police officers approached the cars at 4:10 p.m. threatening to issue parking tickets, shortly after the lowriders arrived at the station.

Bac Sierra did not hesitate to make himself heard. “They’re ticketing cars because we are protesting them killing us!” he said.

No tickets were given and the lowriders eventually complied with police orders to vacate the curb.

“It wasn’t a surprise (the lowriders) came,” hunger striker Sellassie Blackwell said. “But it was a surprise we held this space as long as we did.”

As of May 1, the Frisco Five had gone 11 days without eating. The lowriders are one of many community groups lending support and boosting morale to the strikers. Members from the Nation of Islam were also present on May 1 in solidarity.

Cristina Gutierrez, the eldest hunger striker at 66 years old, was overjoyed to see the lowriders and Nation of Islam assemble behind one movement.

“It was unbelievable to see the wives and the babies and the cars coming by and say how they’re so proud of what we’re doing,” Gutierrez said. “Then I turn around to see the families from the Nation of Islam who are mostly Black. This is the Black and Brown unity right here. That in itself accomplishes a lot.”