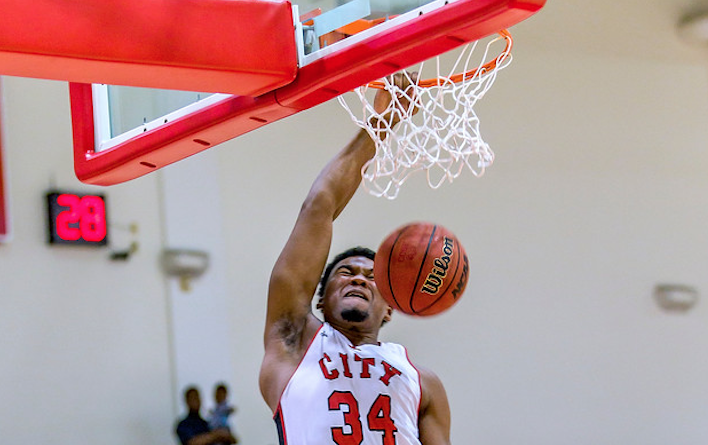 The Rams started off on an 8-0 run, sparked by sophomore guard Eddy Ionescu (16 points, 4 rebounds) who knocked down two early 3-pointers.

Ohlone College would fight back with a pair of their own threes and maintain within competitive distance throughout most of the half, until the Rams began to pull away with under ten minutes to play.

On the next Rams offensive possession Witt was fouled, as he went to the line to shoot two, Ohlone player Damion Jackson received a double technical and was ejected after getting chippy with the referee.

Witt shot 6-for-6 from the line, scoring 12 points in less than a minute.

A minute and half left in the half, Ionescu received a flawlessly placed alley-oop pass from sophomore guard Eddie Stansberry (3 points, 4 assists, 2 steals), in an Eddie to Eddy two-handed slam dunk.

“Coach Justin (Labagh) puts us in the right spots and with all twelve guys having a variety of weapons everyone has the ability to go off,” Ionescu said.

To enter the second half, the Rams sophomore forward Michael Steadman (11 points, 8 rebounds, 3 blocks) initiated scoring with a 3-pointer.

Euro stepping to the basket was sophomore guard Michael Wright (6 points, 6 assists, 8 rebounds, 2 steals) who had a well rounded performance.

The highlight of the second half came was when freshman guard Niamey Harris (4 points, 5 assists, 1 steal) lobbed sophomore forward Lewis Hayes (7 points, 6 rebounds, 2 blocks) the ball for a monster one-handed put back.

The rest of the game was taken over by freshman guard Dexter Hood (16 points, 3 rebounds, 1 steal) who went 6 of 8 from the field, coasting the Rams to their final regular season victory 93-68.

Finishing the season with a 28-1 overall, 12-0 Nor-Cal record the Rams have gone undefeated in conference the past seven of eight years.

For yet another year the Rams were voted No. 1 in the California Community Colleges Men’s Basketball Coaches Association poll.

Leading up to the Ohlone game the Rams coaching staff have been preparing the Rams players for the long road ahead to the State Title.

“We’ve been practicing really hard this week, even with the two game. We want to have our leg under us because in the end we’ll play three games in-a-row,” Head Coach Justin Labagh said.

The California Community College Athletic Association (CCCAA) playoffs begin next week. The No. 1 seed Rams have a first round by playing the winner of Monterey Peninsula and West Hills college.

Depending on the how the Rams compete the State Championship tournament will be held at Ventura College on March 8, 10-11.