By Lucas Almeida
The Guardsman 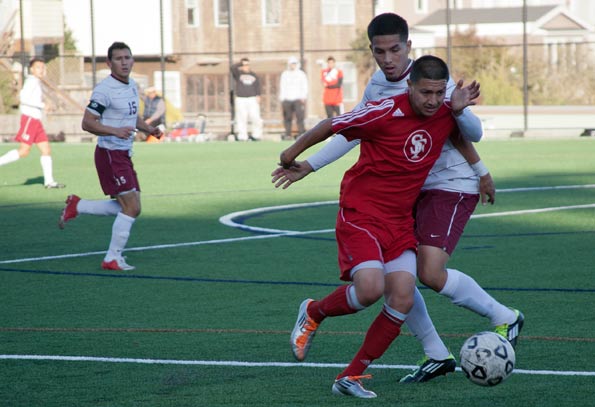 The Rams lost their first game in over a month at home on Nov. 4 to Hartnell College, the No. 3 ranked team in California.

The Panthers extended an early lead and held on to win the game, 3-2, despite a second half comeback by the Rams.

“Although we were disappointed with the loss, this game brought a lot positive motivation and after the game we felt we could have won the game,” said Head Coach Adam Lucarelli. “This game proved to us that we are good and we can play against any team and compete in the highest level.”

With a high volume of aggressive offensive plays and a solid defense, the Panthers showed why they’re currently the third best team in the state,
With only three minutes in, Hartnell sophomore forward Ivan Campos’ shot was rebounded to sophomore forward Max Estrada to score.

The state’s leading offensive player, Estrada, scored his 27th goal of the season.

Soon after, City College kept the pressure on and found their second goal when Juan Palacio scored on a pass from William Nino.

In the second half, Hartnell found strengths to tie the game when Estrada scored his second goal in the match and his 28th of the season.

After a City College miss, Hartnell pulled a counter-attack where the Rams gave sophomore forward Ivan Campos enough space to finish to put the Panthers ahead for good, 3-2.