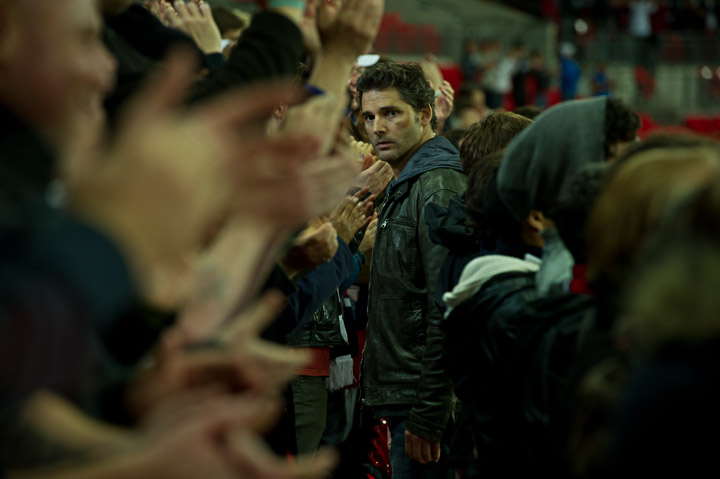 Big brother is watching the terrorist next door and you

“Closed Circuit” is an international suspense thriller that kept me on the edge of my seat from the start. Well acted, gripping plot and a stellar script.

Written by Steven Knight (“Dirty Pretty Things”)  and directed by John Crowley (“Is Anybody There, Intermission”), it is as much about government surveillance, wiretapping, privacy and global terrorism as it is a critique of the British judicial system.

The movie begins with a bang. Literally. A busy London market falls prey to a terrorist bombing killing 120 innocent people.

As moviegoers who have experienced more than our fair share of terrorist attacks in the recent past—we want justice, now.

We want someone to blame: the face of evil. We demand a manhunt ending with a terrorist hiding out in a basement somewhere, wounded and surrounded by police, begging for forgiveness. Someone’s gotta pay

The government says he’s the only surviving member of a sinister terrorist organization responsible for the deadly attack. Let’s hang him. Of course, he says he’s innocent. Who to believe?

The British media call it “the trial of the century.” Move over O.J. Simpson. Out of the way Jodi Arias. We are prosecuting terrorists. Here’s the hitch. The government wants to use “secret evidence” to prosecute the alleged terrorist. So secret that neither he nor his defense lawyer can see it. Sounds fair, right? Wrong. Perhaps Lady Justice is peeking out from that blindfold after all.

The attorney general hand-picks Hall for her aggressiveness, her legal prowess and her vast knowledge of the British court system. Right? Right. Well, without giving too much away, there’s more to it than that.

There’s also some rules about this “secret evidence.” It cannot be disclosed in open court. Second, once this evidence is disclosed to Hall, she cannot communicate with other members of the defense team, including Martin Rose. Journalists are also not allowed in the courtroom. Sounds backward? It is, but it’s also the reality of the British legal system.

Basically, a lot of people are up to no good. Is it the government? Is it a terrorist organization? Or is it one in the same?

The beauty of this movie is that it makes you think and question everyone. The actors all do a great job, especially Hall. She pulls off the barrister role quite well—even when standing in open court wearing a George Washington wig and a black robe.

No, it’s not a costume party or a Revolutionary War reenactment. This is the decorum of the court system in Britain. Which is another reason I enjoyed it. I learned about British law.

This could have easily been a very confusing and stereotyped plot hyped up with lots of guns and shooting, sort of like “The Bourne Supremacy,” blink and you will miss something or just another long, drawn out action scene.

Here, the plot moves along with fluidity in a psychological way. Bana and Hall don’t use guns or high-powered rifles to get out of sticky situations. They use their brains.

This movie is effective, smart and worth your 96 minutes.