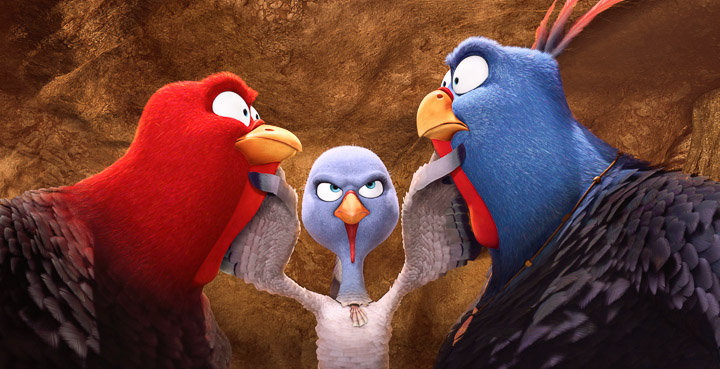 “Free Birds,” the new 3-D animated Thanksgiving comedy, isn’t the worst way to spend an hour and a half of your life. But it’s far from the best.

Packed with played-out jokes and culturally insensitive racial stereotypes, it’s as much an ode to Chuck E. Cheese as it is to sight gags and stupidity.

Chuck E. Cheese, you ask? You mean that rat in the red vest that serves cardboard pizza with dehydrated cheese and runs a Vegas-style casino for kiddies with golden tokens?

Yeah, that’s the one. What does he have to do with Thanksgiving? I’m still asking myself that question. Basically, pizza is poised to take the place of the Thanksgiving bird in this outlandish film.

Reggie (Owen Wilson) is just the bird to make that happen. He’s a regular livestock turkey, living on a farm and getting fat off the grain. He’s also poised to become someone’s main course.

That is until the President of the United States decides to pardon the lucky ole’ bird from becoming dinner and give him his own room at Camp David. Ridiculous? Read on.

Somewhere between evading death row and his artery-clogging, overfed existence (Reggie is a pizzaholic), he has an epiphany.

Reggie meets Jake (Woody Harrelson) the relentless founder—and only member—of the Turkey Freedom Front, a liberation group protesting the oppression of fowlkind. Jake learns this is his destiny.

These feathered friends join together to stop the mass execution of turkeys everywhere by jumping in a time machine and visiting the Plymouth Colony in 1621, just days before the first Thanksgiving.

Their mission? Stop the pilgrims and Native Americans from eating turkey for their first meal and replace it with—pizza.

When they arrive they meet Cmdr.Myles Standish (Colm Meaney), a hunter employed by Gov. William Bradford (Dan Folger) to seek out and capture turkeys for the upcoming feast.

It’s unclear why Standish speaks and dresses like he’s John Wayne straight out of a spaghetti Western. Perhaps he took a ride in the time machine along with the turkeys?

The most disturbing part of the film is the trite insensitivity toward the Native American culture and other ethnic minorities. The Indian chief says little more than “how,” and then proceeds to make sexist jokes about his wife’s cooking.

There’s a Latin-inspired turkey running around the woods with a thick accent and used mostly for comic relief.

I may not be a history scholar, but I’d take a wager the Taco Bell Chihuahua wasn’t anywhere near Plymouth Rock in the 1600s. But this film asks audiences to suspend all commonsense beliefs.

With all the product placement stunts, he might as well have been advocating for Thanksgiving tacos and calling out, “Yo quiero Taco Bell.”

Stereotypical portrayals like these are unnecessary and insidiously insulting.

On the bright side, the animation and CGI effects were actually very good. The bright colors at least kept me visually entertained.

However, I would hardly spend the money to see it in 3-D.