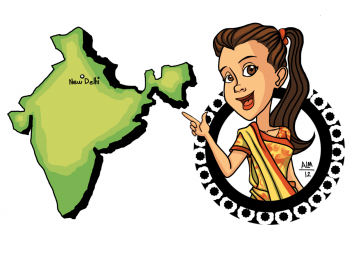 Before I left for my journey, the advice I most commonly received was, “nothing can prepare you for India.” This is a severe understatement. From the moment I walked off the plane, I felt I had landed on a different planet. This can’t be Earth.

New Delhi is a district in the metropolis of Delhi—and I smelled it before I saw it. The polluted air from outside had crept into the airport, filling the building and my lungs with thick smog.

In addition to causing a perpetual cough that plagues almost all Delhiites, the terrible air quality in Delhi could be killing people.

A 2011 report by the Health Effects Institute found that improving air quality in highly polluted areas such as Delhi might actually save lives.

Navigating through the opaque air to find a cab would have been impossible if drivers weren’t lined up directly outside the airport waiting to snag customers.

With a bandana tied around his mouth and nose to prevent “polluting his lungs,” my taxi driver weaved through laneless streets, dodging pedestrians, motorcycles, bicycles, auto rickshaws, cars and cows. Yes, cows.

Overwhelmed and exhausted, I got to my hotel and promptly laid on my bed thinking, “what the hell am I doing here?”

Five days have gone by, and I still don’t know exactly what I am doing here–but I am loving every second of it.

The streets in Delhi are brimming with life. In one step you can see everything from hot chai tea for sale to a pack of stray puppies competing for their mother’s milk. Not to mention wagon-bearing cows, fresh fruit and vegetable stands, handcrafted jewelry and intricately designed Indian clothing.

There is no shortage of sights, smells or taste—-and I’ve just barely scratched India’s surface.

On my first day out, I was struck by the difference in the way I dressed compared to other women. While in California, I generally wear skinny jeans with a T-shirt or a knee-length floral dress.

This is not acceptable in Delhi.

The majority of women are covered from head to toe in loose-fitting tunics (kameez) with trousers (salwar), and a scarf (dupatta) to cover their head and chest.

As a gesture of respect, and to protect myself from unwanted attention, I conformed to this dress code. I bought a full salwar kameez for 1,366 rupees, or approximately $25, at the local textile store.

The difference is dumbfounding. I am no longer confronted by the hostile stares of women, nor the gaping looks of men, who would often direct their eyes directly at my chest—sans subtlety. I also feel more welcomed in restaurants and markets.

First lesson: While in India, do as the Indians do—it will take you a long way.

My experience in Delhi has included a visit to Gurdwara Bangla Sahib, a Sikh shrine with walls and a rooftop of pure gold; Lodhi Garden, a peaceful park with parrot-filled trees and tombs dating back to the 15th century; The Hindi Cinema, where I watched a film with no subtitles (couldn’t tell you the plot line to save my life); and a rooftop cafe where I sat back, sipped chai and overlooked this baffling and beautiful city.

Oh, and I was asked for my hand in marriage.

While walking along a busy roadside in Delhi, I was approached by a local man who insisted he treat me to tea.

After many refusals, I finally gave in and accepted. He was kind and polite, and I was charmed by his knowledge of India. He spoke English well, and I was happy to have made a local friend to show me around.

But when he found me the next day to confess his love, propose marriage, and offer to build me the biggest house in Delhi, I was shocked to say the least. I refused and explained that my heart is in California, but thanked him for the courteous offer.

Meeting people is all a part of the traveling experience, and most of the time the people are great. But my time here has been far from carefree.

I am perpetually haunted by the revulsive reality of India’s rape capital, where statistics say a woman is raped every 22 minutes—23,725 women a year. This is inexcusable, even in a city with more than 20 million people.

With this in mind, I am on constant guard.

As a solo woman, I can never be too cautious—which means staying in crowded public areas, being in before dark, continuously checking over my shoulder and always locking my door. Taking these precautions is the only way to travel smart while still enjoying the experience.

I was sure Delhi lacked any rhyme or reason. I have been proven wrong. The city has filled my ears and soul with its rumbustious rhythm. The people are welcoming, the food is divine, and the sights are abounding. When you look past the layer of smog, Delhi is clearly a place to celebrate life in India.

Tomorrow, I fly to Kolkata (Calcutta), where I have been told to expect a daily festival of human existence.  I can only imagine what this Bangladesh bordering city has to offer—but if I have learned anything thus far, it is that India will far exceed my imagination.