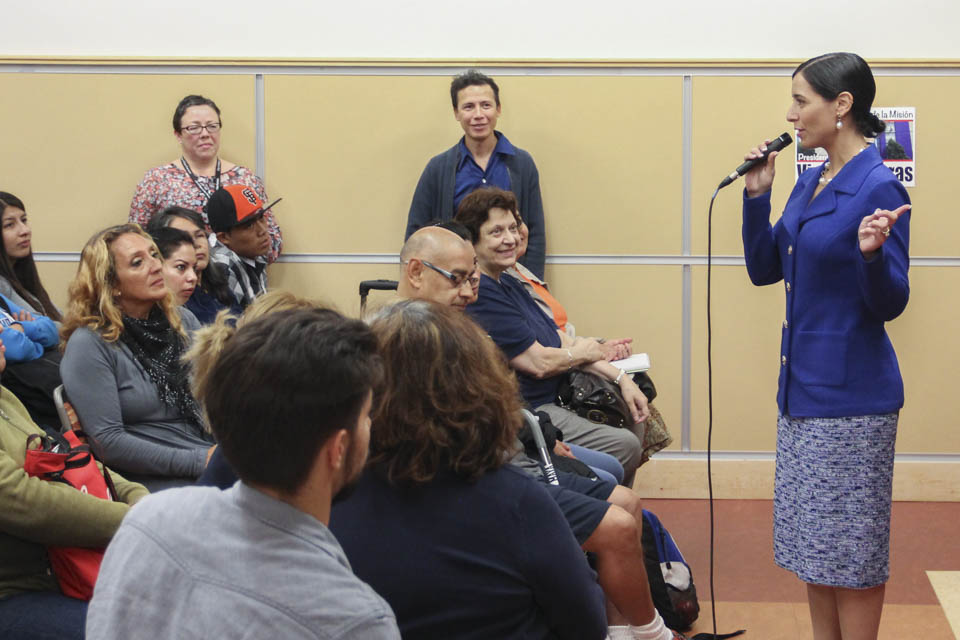 The City College community was eager to receive Parras and her new plans to enhance the Mission Center. More people than expected were out of class and at the public comment.

Parras tag-teamed with Dean of the Mission Center Jorge Bell to wrangle up a welcoming audience that overfilled Room 107 of the Valencia Building. The guests flowed in at 11 a.m. and filled every chair in the room, leaving some of the audience straggling along the back exit doors.

After settling the crowd, Parras opened up to the audience by congratulating their successes on behalf of the college and thanking them for accepting her as their new president. The crowd listened intently as she revealed her plans for the college.

“This institution is a wonderful institution, y’all have done an amazing job at where we are and we just want to take it to the next level,” Parras said. “That’s what I’m here to help you do, and I’m very glad and thankful for the opportunity.”

Parras said the first task given to her after being hired was three words: “advance,” “transform” and “innovate.” After two and a half months at City College, Parras has been able to make improvements at Ocean Campus and the Centers, but recognizes there is more work to be done.

Ocean Campus was the first location to see improvements. Recently Parras organized both the polishing of the floors at Conlan Hall and the remodeling of the Cafeteria, which included patching and painting the interior. A plan to improve the City College Centers are in the works.

A previously held open session with students and facility was held at the Downtown Center to talk about fifth floor renovations.

“I’m going to rely on you to tell us what that need is,” Parras said.

Parras said she is in the process of speaking to the deans to find out the needs of each center through the students and faculty. Parras said they are currently building a schedule to provide the equal services for students who attend evening and weekend classes at the Mission Center.

“One of the things that we’ve been working on is extending hours,” Parras said. “We realized that we are currently not serving the evening and weekend student.”

Both Spanish speaking and bilingual students and faculty asked questions and commented about the Mission Center’s needs. Parras and bell took turns answering the questions in Spanish and English.

“Since 2001 we have decreased our ESL classes that we offer and we are now serving 12,000 non-credit ESL students less than we were serving in 2001,” Susan Lopez, Mission center ESL instructor said.

Lopez is worried about a further decline of non-credit ESL classes offered at the Mission center. ESL enrollment has dropped after the cuts to the department and its hurting her students.

“I want to make sure the college is interested in continuing the same level of non-credit ESL that we have now,” Lopez said. “Maybe even increasing it more to the levels that we had before.”

Bell wants the Mission Center counselors to work alongside the ESL students. He says the guidance will increase the student’s transfer rates.

Another program to increase transfer rates of the Mission Center students in the Fall 2015 was also mentioned.

“We’re working on bringing a mentor academy program,” Bell said. “It’s a two-year program that will guarantee acceptance into any California State University.”

Parras will hold open sessions at all City College Centers. The City College community will have the opportunity ask Parras questions and make comments.

“You’re going to see me out here a lot,” Parras said.