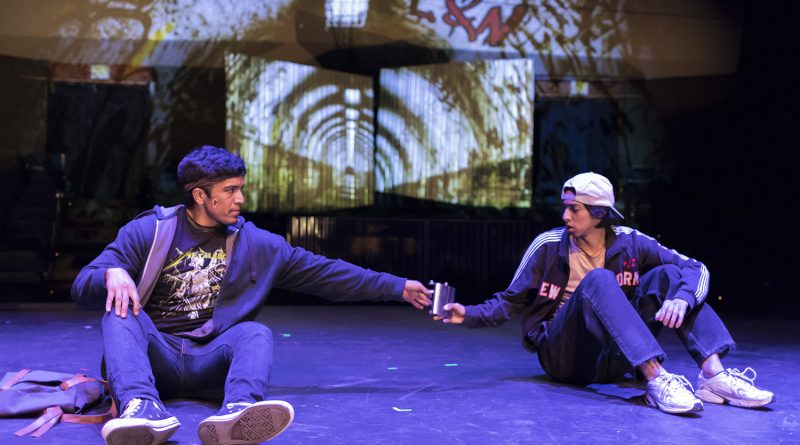 “Anon(ymous)” is not your ordinary play. Created by playwright Naomi Iizuka, the modern adaptation of Homer’s The Odyssey captures the story of an immigrant mother and son who embark on separate journeys, meet an array of individuals, and face issues of racism, exploitation, immigration, and power in contemporary America.

After their boat capsized during their escape from a civil war, the mother Nemasani (Circle Dai), is forced into a refugee camp while her son Anon (Marco Lemus) tries to figure out who he is.

Both mother and son encounter positive and negative influenced individuals, some with ulterior motives and others with kind-hearted gestures.

Separated from his family and missing home, Anon is guided by Naja, a character who is based on the goddess Athena, (Olivia Dickey). Naja encourages him to “start in the middle” to remember his story.

His mother who works in a sweatshop, must confront the manager of the sewing factory Mr. Mackus (Brad Winch), who makes racist comments about Asian names.

“It’s hard to pronounce but we call her Penny,” Mr. Mackus says. He also threatens Nemasani to marry him or she will lose her job.

While Anon tries to figure out his name and who he is, he still feels lost.

“He’s anonymous. He doesn’t remember anything. He picks names out from the situation because he’s very quick-thinking, but he says whatever will get away from the awkward phase,” said director Patricia Miller.

According to Miller, “the playwright Naomi Iizuka is an expressionist poet with a surreal cinematic style.” In her vision, she favored radical staging. She emphasized that this was because when the audience sat in the auditorium, it is “hard to have a direct impact [on them]. It offsets the audience’s expectations for a more intimate stage and closer interaction,” said Miller.

When the audience sat on stage, the actors leapt into action to portray the refugees under the stress of their circumstances. Strewn on the floor lay traditional dress clothes from various cultural customs. There was a slideshow of people of different ethnic backgrounds who faded in and out, while cultural dance music and drumbeats sounded above the audience. A large table with a toy ship stood next to a trash bin titled “food scraps.”

The first scene was introduced as lyrics proclaimed, “I’m only human after all,” from the song by John “The Ragin Cajun” Jones, as groups of actors came incrementally from the sides of the stage.

Each actor proudly recited such statements as, “where I come from… the color of green tea…poisonous frogs…waterfalls taller than skyscrapers…” that led the audience to become curious about who the characters were.

To help the actors prepare for the role, Miller asked students and alumni to find anything that they could relate to from the play. “What is home? Food, family, familiar places or a feeling and understanding of belongingness. Even if you’re not a refugee, I think young people can relate to that,” she said.

In between the longer scenes Miller interwove short scenes of actors portraying ICE officials trying to catch undocumented immigrants running away. The audience members’ stunned expressions reflected their feelings about the subject.

In one scene, the actors representing ghosts of refugees each recited a monologue about themselves. Miller recalled why this dialogue is her favorite. “I get chills. It’s every time the anonymous chorus of refugee ghosts tell their names and what they hoped for and how they died,” she said.

Because of Iizuka’s play, audiences are able to explore further the racism and immigration unfairness that many immigrants continue to still face in the United States. The play is intentional because it relates to the real-life events of refugees escaping from economic hardships.

“We don’t know why they want to get here but we know they want to escape an economic circumstance. We never know their real names…it is hard to see the simplicity, to surviving death. That’s why I had to do this play.”