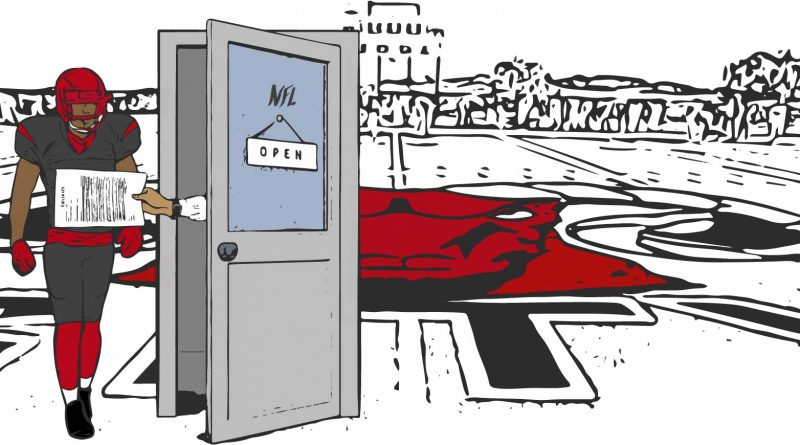 Former City College football player Shalom Luani received the call of a lifetime this April when he was drafted by the Oakland Raiders with the 221 pick in the seventh round of the NFL draft. Luani, an athletic hard hitting safety who played at Washington State for the past two seasons was extremely proud to achieve a huge personal goal.

When Luani got the call he said he felt, “Everything that anyone would ever want to feel. I was just like nervous and when I got off the call with the Raiders I couldn’t say much. I was just so excited and wanted to hug everyone around me.”

Luani began playing football as a high school freshman in American Samoa where he also played semi-professional soccer. “All the hard years of work paid off,” Luani said.

Despite the monumental occasion Luani was back at City College on Monday, working out in the weight room just two days after the draft.

Playing in Oakland to start his career will make the transition to the NFL easier for Luani. “I have friend and family around here so I will be a lot more comfortable in the Bay Area. At City College I have coaches that can help me. I’ve been in the Bay Area since my freshman year at City College so it’s great to end playing here again,” Luani said.

In Oakland Luani will be joining a talented secondary that includes two stud safeties.  The Raiders have Karl Joseph at strong safety who just concluded a stellar rookie season and Reggie Nelson who’s a veteran Free Safety and an expert at baiting the quarterback to force easy interceptions. As a young player Luani will have talented teammates to learn the ins and outs of the game from.

“My mentality coming in as a rookie is just trying to get a job. It is just about you and what you can do. If you can take it, take it. I want to work and learn from the veterans and move forward,” Luani said.

Luani has clearly put on muscle since leaving City College. Luani’s muscles were bulged and he looked almost large enough to play linebacker as he exercised on a medicine ball. This increased bulk in muscle and could prove a huge advantage for Luani.

In recent years linebackers in the NFL have been decreasing in size as teams want more nimble players to defend against the pass. Instead of 250 pound goliaths that normally play on the line, teams are more predisposed to players that fit Luani’s mold: fast and quick enough to play in the secondary but strong enough to stop the run.

Luani wasn’t the only former Ram that ended up with a local team. Tight end Cole Hikutini who played at Louisville after ending his career at City College was signed as an undrafted free agent by the 49ers. Undrafted free agents are players not drafted in the seven rounds of the NFL Draft that teams sign to contracts and are invited to training camp to be given a shot at making either the team’s main roster and/or the practice squad.

As a drafted player Luani has a much better shot at making the Raider’s roster but being drafted isn’t a guarantee that you will make the roster.

“At the end of the day it all comes down to me,” Luani said. “I’ve got to work real hard and focus on what I can do to improve myself every day. Worrying about anything else will just make you distracted.”