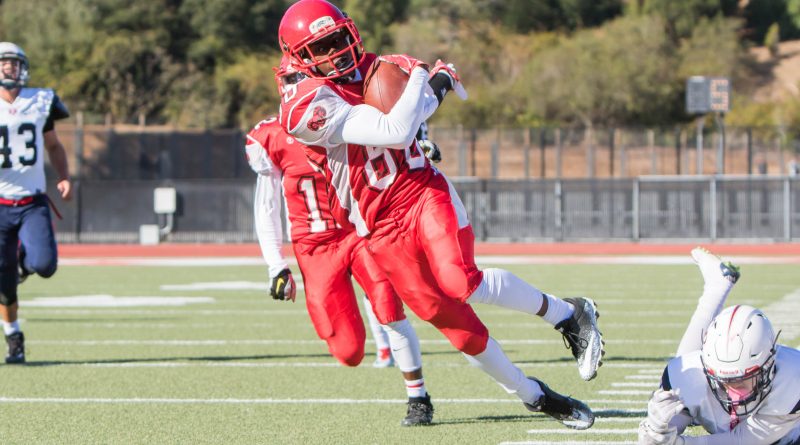 Another week, another dominating victory for the Rams. Facing off against the Santa Rosa Bear Cubs at home, the game was originally scheduled to be played at Santa Rosa but because of the fires was moved to City College. The Rams easily won the game 54-7.

It was a total team effort for the Rams with the offense, defense and special teams all excelling. Quarterback Zach Masoli and running back Isaiah Floyd made sure the offense put up points while the defense shut down the Bear Cub’s offense.

The Rams got their first touchdown of the game two minutes into the first quarter, on their first offensive play, when Floyd took a handoff and ran 35-yards to the end zone. The offense was set up with optimum field position after cornerback Terin Adams launched himself into a Bear Cat wide receiver and forced a fumble, which he then recovered himself to give the Rams the ball at the opponents 35-yard line.

Less than five minutes later the Rams would have the ball back. This time it was Masolis’ chance to shine. Masoli led the offense 76-yards down the field for the score topping off the drive with a magnificent 40-yard touchdown pass to receiver Kevin Fox Jr.

Floyd and Masoli would alternate back and forth on scoring the Rams next four touchdowns.

Masoli went first, rushing for a nine yard quarterback sneak touchdown. Inside the red zone, Masoli dropped back to pass but found no one open so kept the ball and ran forward. A Bear Cat defender smashed into Masoli, but he was able to stay up and keep moving. At the goal line another defender dropped his shoulder to lay a hit on Masoli, but Masoli braced for contact and then bounced off the defender to left and then dived ball first to cross the goal line for the score.

Floyd was again the beneficiary of excellent field position courtesy of a turnover the defense forced. This time cornerback Bejour Wilson intercepted a pass thrown by Santa Rosa quarterback Jordan Brookshire giving the Rams the ball at the opponent’s 28-yard line.

Floyd would go all 28-yards for the Rams, first rushing for 13 yards, then 11, and then finally finishing the drive off with a four yard touchdown run. The offensive line on the drive, and all game, controlled the defense pushing them back and creating ample space for Floyd to run through.

“I have great chemistry with my offense line,” Floyd said. “We have great timing and I’ve been playing running back my whole life so it’s like second nature. With those guys up front it’s easy.”

The defense was relentless all afternoon. The front seven provided non-stop pressure on the quarterback while the secondary made sure none of the Santa Rosa receivers were open.

“We were just locked in their,” safety Joey Banks said. “We made sure to dominate the line and to force turnovers.”

“Our defense is fast and big,” Head Coach Jimmy Collins said. “Today they showed that.

Before the first half ended Floyd and Masoli would get their other touchdowns. Masoli threw a magnificent 86-yard touchdown pass to receiver LeRoy Elliott Jr. while Floyd had a three yard rushing touchdown.

The Rams continued their dominance into the second half with backup quarterback Sean Duffy completing a 11-yard touchdown pass to Tyreek Allen. Kevin Fox Jr. added a 39-yard rushing touchdown on top of his earlier receiving touchdown. Punter Louis Hedley came close to scoring his own touchdown, rushing for 56-yards on a fake punt that showcased his athleticism before being dragged down by the opponent.

Santa Rosa finally scored in the fourth quarter, the beneficiaries of great field position because of a Ram’s turnover. Their quarterback, Brookshire, completed a four yard pass to receiver Seth Vernon to avoid an embarrassing shutout.

Masoli finished the game with 217 passing yards, completing 10 of 15 passes with two touchdown passes while Floyd had 162 rushing yards on 13 attempt with three rushing touchdowns.

Coach Collins was pleased with his team’s performance after the game.

“We want to get better every week, and today showed that we are getting back every week,” Collins said. “If we keep doing that and only worry about ourselves, we will be ready come playoff time.”

One thought on “Rams cruise to victory over Santa Rosa”