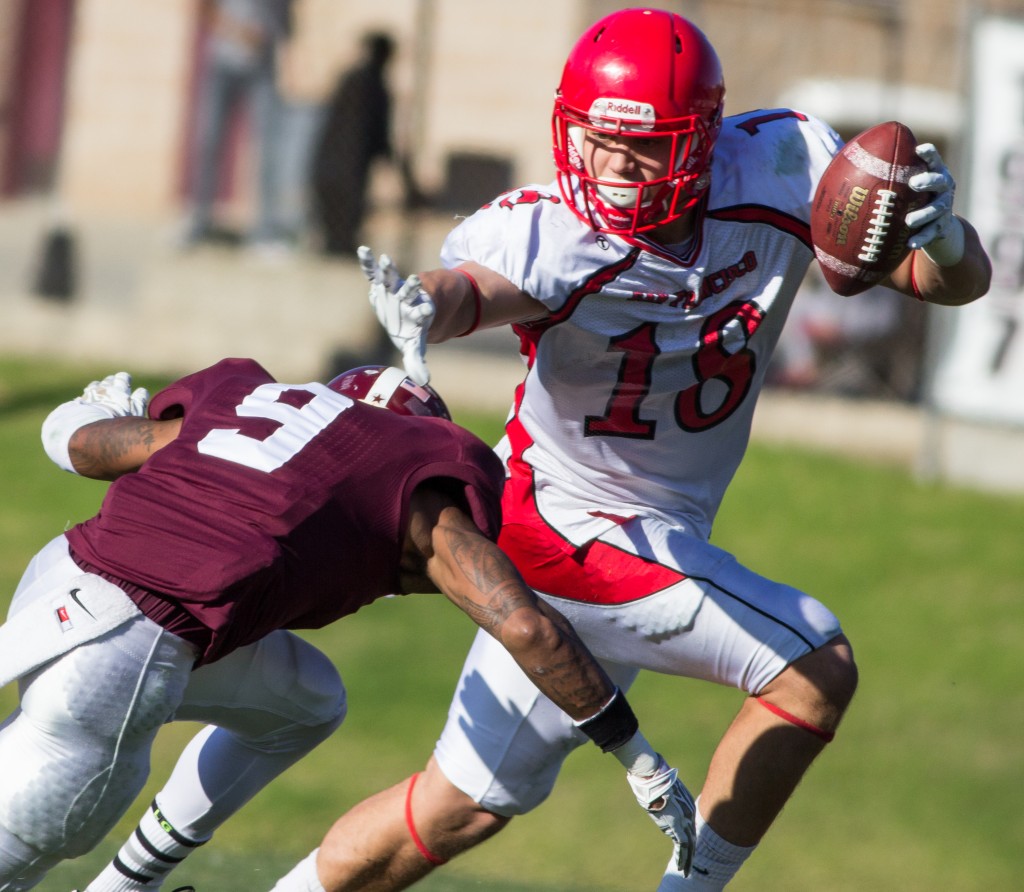 The two teams battled back-and-forth all afternoon, but in the end, the City College of San Francisco Rams were unable to overcome the talented Mt. San Antonio Mounties.

Losing the California Community College Athletic Association football championship game 27-17 was a rough way to end an otherwise successful 2014 season for the Rams.

The state championship unfolded on Saturday, Dec. 13, at Hilmer Lodge Stadium, the home field of Mt. San Antonio. The stadium sits in the middle of Walnut Valley with a picture-perfect vista of the southern California foothills. The sky was clear and sunny for the game and free of the smog that typically plagues the region, thanks to the recent rains.

Both teams were loaded with talent, but the deciding factor were turnovers. The Rams forced two turnovers, both of them fumbles, while the Mounties recovered a fumble and had three interceptions.

“They didn’t hurt themselves,” said Rams corner Uriah Harris. “Whoever wins the turnover battles wins the game. Turnovers, penalties and we also gave up big plays and they capitalized.”

The first five minutes featured two turnovers. The Mounties began the game with the ball, and after an unsuccessful drive, punted the ball away.

The Rams, under the leadership of backup quarterback Jerry Peralta, drove down the field, but once inside the Mounties’ red zone, Peralta threw an interception. Scanning the field, Peralta found receiver Rodney Lawson and threw him the ball. Mounties cornerback Joseph Bryant made a play on the ball and ended up intercepting it at the three-yard line, one of his two picks of the afternoon.

It was not all lost for the Rams though, who on the next play bounced back and forced a fumble. With the ball on the ground, Rams defensive lineman Tavita Faaiu picked it up on the four-yard line. With the ball back in the offense’s possession, the Rams were unable to pound the ball into the end zone against a very sturdy Mounties defense. Instead, the Rams had to settle for a 23-yard field goal by kicker Cristian Antezana, giving the Rams an early 3-0 lead.

Later on, in the first quarter, the Mounties tied the game up with a 26-yard field goal by kicker Alberto Villareal.

The Rams scored the first touchdown of the afternoon five minutes into the second quarter. Peralta methodically led his team 55 yards down the field on seven plays, capping off the drive with a one-yard touchdown on a quarterback keeper.

Unfortunately for the Rams, their lead lasted barely a minute. Mounties quarterback Justin Alo, who had a stellar afternoon throwing for 283 yards on top of two rushing touchdowns, led his team 75 yards down the field in only 1:15 to tie the game up at 10-10.

The four-play drive featured a beautiful deep pass from Alo to recover Derrick Macon for a gain of 38 yards. Harris was able to wrestle Macon down to the ground before he was able to get to the end zone. Despite the last second heroics by Harris, the Mounties were able to get the touchdown on the drive when Alo scored on a six-yard quarterback keeper play. Alo, a big and physical quarterback, dropped his shoulder like a running back and pounded his way into the end zone.

Three and a half minutes before halftime, the Mounties scored again, this time on a 22-yard field goal by Villareal. It could have been worse for the Rams, but safety Shalom Luani made a big tackle for a loss on a key third-down play. Instead of scoring another touchdown, the Mounties were forced to settle for the field goal, giving them a 13-10 lead at the break.

The second half proved to be difficult for the Rams on defense, offense and special teams. The Rams received the ball to begin the second half, but after an unsuccessful drive, were forced to punt the ball. Mounties wide receiver Aaren Vaughns fielded the punt at the 16-yard line and immediately ran downfield. Juking and dancing his way past Rams players, Vaughns took the ball 84 yards to the end zone to give his team a 20-10 lead. It was the beginning of the end for the Rams and the Mounties wouldn’t relinquish their lead for the rest of the game.

There were some bright spots for the Rams during the second half. Faaiu picked up his second fumble recovery of the game and this time took it 100 yards for a touchdown. Faaiu, a big defensive lineman, ran down the field like he was a swift running back, burning his way past the Mounties’ offensive players who were trying to bring the big man down.

Faaiu’s teammates did a superb job of clearing the way for him, providing him with a wall of blockers and flattening anyone who got in their way. The big play gave the Rams temporary hope that they still might win the game.

“I couldn’t have done it without my teammates,” said an emotional Faaiu after the game. “I just wanted to get to the end zone, so I just kept running.”

The next drive by the Mounties extinguished that hope. Capped off by a four-yard touchdown run by Alo, the Mounties drove 48 yards in eight plays, leaving the score at 27-17. The 10-point lead was all the Mounties needed, with their defense shutting the Rams out for the rest of the game.

The fourth quarter was the Rams’ undoing. The Mounties defense, along with some critical turnovers and mistakes by the Rams, were too much to overcome. Neither team scored during the quarter. When the clocked ticked down to zero, the score stood at 27-17.

The despondent Rams walked off the field while the Mounties and their fans, who were a spirited bunch, celebrated. The championship and bragging rights for best team in California were theirs.

“We had a chance in the fourth quarter. It was 27-17 and we had the ball on their 20-yard line, but then the bad snap happened,” said Rams head coach George Rush after the game. “At worse if we get a field goal, it’s a one score game and everything is different.”

“But it didn’t happen and that is the way it is. It’s just disappointing,” Rush said. I feel bad for our team. They worked and played so hard. I can’t ask for any more out of them.”

The Rams finished the season with an 11-2 record. A win would have given Rush his eighth California state championship. Rush, who finished his 38th season at the helm of the Rams, believes his team accomplished a lot, despite losing the championship.

“Even though they didn’t win the championship game, I told them there is nothing to be embarrassed of,” Rush said. “What they accomplished is remarkable, despite the injuries that happened this season, they came back and made plays. They will go down in the annals of City College as one of the great teams.”