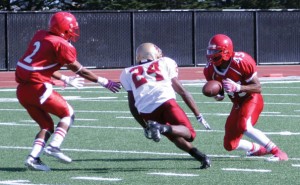 It only took City College’s offense eight seconds to take the lead against De Anza College. From there, they never looked back.

Before packing their bags for road trips to San Joaquin Delta College and Butte College, for what may be the two biggest games of the season, the Rams passed their latest test with ease, defeating the De Anza Dons, 48-7 at home on Oct. 1.

“It was nice to see that we started off fast offensively,” said City College head coach George Rush. “We didn’t fool around and we got up on them early.”

The Rams set the tone with their first offensive play when freshman quarterback Turner Baty launched a 43-yard pass to wide receiver Roman Runner to take an early lead.

After De Anza tied up the score, Baty once again took the reins of the offense, throwing three more touchdown passes and even running one in himself as the Rams took a 27-point lead into halftime.

Baty finished the game with 324 yards passing and four touchdowns.

He loves throwing the long ball.

“When you have the time to do it and have the guys to go get it, it’s great,” he said.

Baty has continued to dominate, throwing 11 touchdown passes for the season. He is tied for fourth in Northern California.

Although it did not effect the outcome of the game, the Rams finished the game with 225 penalty yards, showing why they lead all of Northern California in penalties.

“We have to get rid of penalties,” Rush said. “Penalties are a joke. I’ve never seen more penalties in my life.”

Even the players admit they are sick of seeing yellow flags thrown all over the field.

“It’s definitely frustrating,” Baty said. “We have to fix it before we get into the conference, because against better teams it’s going to hurt us a lot more than it did today.”

In the second half, the Rams used their bench as they ran the ball giving touches to four different running backs in DeShae Edwards, Johnny Green, Bobby Burton, and Dominque Wilson.

While Edwards led the way with 66 yards rushing, Burton found a hole in the fourth quarter to put the Rams up by 41 points to seal the game.

Whether it’s himself or the other running backs taking the field, Edwards knows he is there for his team whenever called upon.

“I’m just playing my role. Whenever they call for the run, I’m there,” he said.

“We need to execute our plays as a team and make sure everyone is doing their job, from the offensive line to the quarterback to the running back to the receivers,” he said. “It’s about the whole offense and the whole defense so I think we need to step it up on both halves.”

Now the Rams (4-0) will board the buses to take their game on the road against the San Joaquin Delta Mustangs on Oct. 8.

“We have to keep playing turnover free ball like we have been and just come out fast,” Baty said. “When you take the crowd out of it and come out firing against a team when you are at their house I think that is the key for getting a victory.”