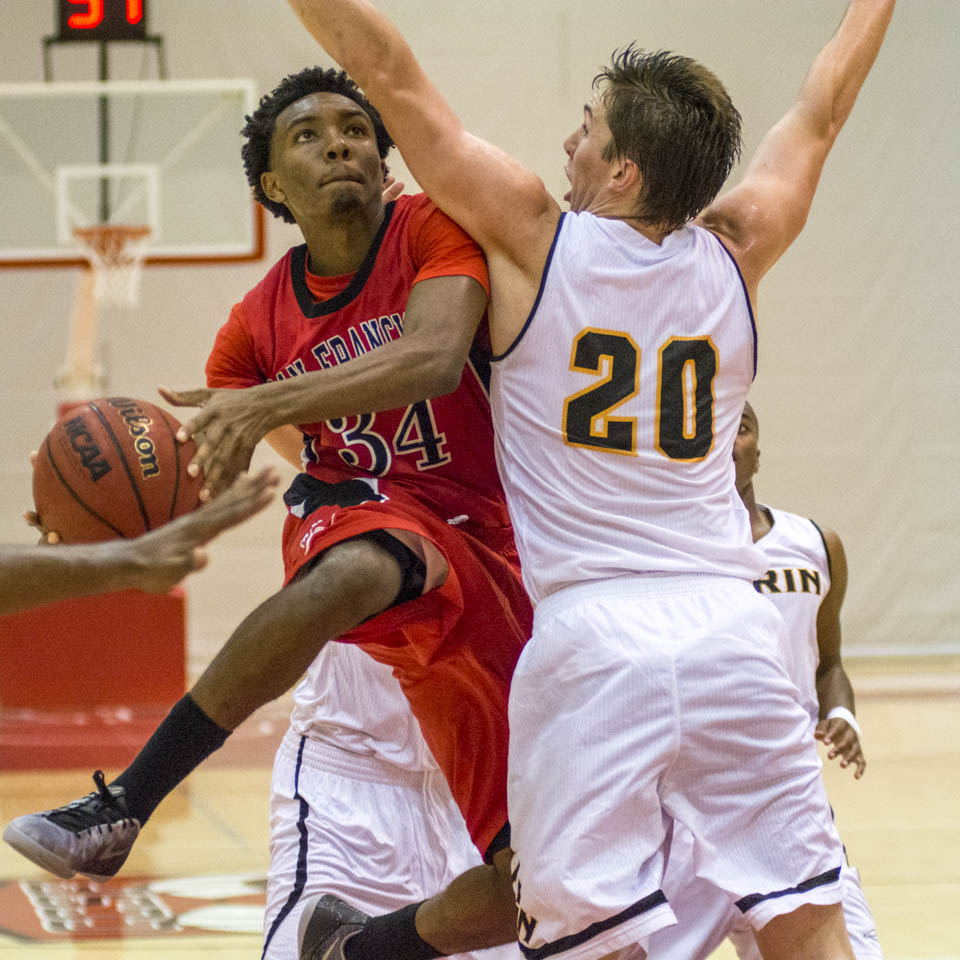 Dominating the entire game, it was a night and day difference from their previous evening game when they lost 91-70 to Marin College to start their 2014-15 season.

Hosting a tournament to kick off the season, the Rams needed the weekend’s slate of game to familiarise new players with the system and build team chemistry.

“We played more of a team today than yesterday,” said Rams point guard Vincent Golson. “If we are able to play like we did today and all stay on same page we will be good. Last night was our first time playing together. We didn’t even have a full weekend of practice to mesh together. Some of our guys didn’t even play basketball last year.”

Golson is one of the key returning players for the Rams. Last year Golson was the back-up point guard but still got significant playing time, serving as a catalyst for the offense.

Despite being small, only 5 feet 8 inches tall, Golson is lightning fast with the ball and has great dribbling prowess.

All afternoon Golson was able to drive to the hoop to draw defenders before kicking out the ball to teammates on the perimeter for uncontested 3-pointers. On the defensive end, Golson was able to force Napa into making turnovers or use his quick hand to get a clutch steal. More often than not Golson made Napa pay for their mistakes by taking the ball down the court for a layup or find a teammate open on the fast break for the easy score.

“We played better today, but we have a long way to go,” Head Coach Justin Labagh said.

Despite the causes for concern, Labagh does see significant potential on his current roster. “We did a good job of moving the ball for most of the game. We do have guys who will be able to produce. Julian Harrell had a very good game, I’m hoping for more of that all year,” Labagh said.

Harrell is a sophomore who just transferred from the University of Pennsylvania. The 6-foot-5 forward, originally from Los Angeles, looked like the most polished player on the floor.

Possessing a balanced overall game, equally comfortable with taking a long jumper as he is driving hard to the hoop, Harrell figures to be a key component for the Rams this season.

“He is going to be the guy. Our glue guy. He has the most basketball experience on this roster.” said Labagh.

Alongside Harrell, the Rams picked up another player who figures to contribute immediately. Rams 6-foot-2 sophomore point guard Blair Mendy played significant minutes in the game and despite it being his second game with the team already looked comfortable in his role. He showed off his nice range by drilling multiple long jump shots and deep 3-pointers.

Mendy is a very versatile player, and it is hard to pencil him in at one particular position. Listed as a point guard, his shooting ability and size makes him equally adept at shooting guard. His scoring ability complements Golson’s more traditional style of playing point guard.

When both ball handlers were on the court at the same time it worked to the Ram’s advantage, with Golson driving hard and then kicking it out to an open Mendy.

“We played better today,” said Mendy. “Once we are all used to each other we will be ready for anyone we play.”

Napa did expose some weaknesses in the Ram’s game. Towards the end, the Rams let their lead slip, giving Napa the slightest hope that they could mount a comeback.

“We need to work on our defense,” said Labagh. “To compete at the end of the season it is ultimately going to come down if we can play good team defense, and we are far from that right now.”

Luckily for the Rams they have four months to build chemistry and play better defense. If the team can meet that challenge, this years squad might have the potential to bring home a banner.

Next home game Saturday Jan. 1 against the San Jose Jaguars