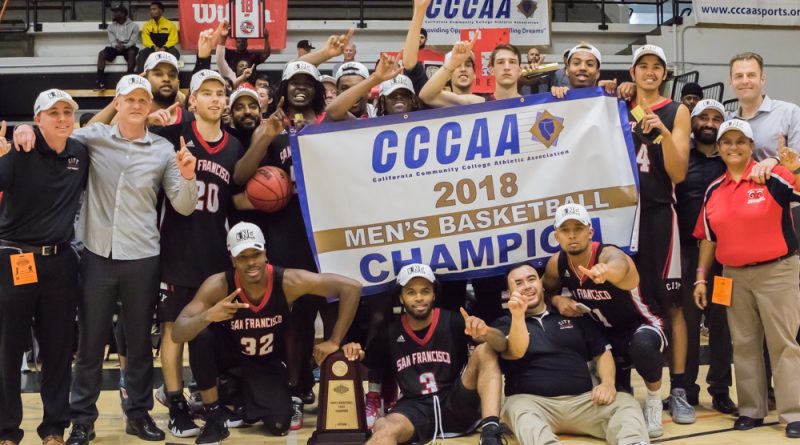 It’s City College’s third title since 2011, and the win avenges the Rams’ 79-77 Final Four loss last year to the Falcons.

“We were up 18 last year and lost it, and it haunted us,” Sophomore Guard Eddie Stansberry said. “We knew we needed to get here and get revenge.”

The Rams trailed 39-38 at halftime, but once the second half began, they established control of the game. City College scored the first nine-point and never relinquished the lead after that.

“We made a couple adjustments at halftime,” Head Coach Justin Labagh said. “We knew if we kept going inside, they would collapse their defense, and then we would be able to kick the ball out for open shots.”

Unlike their previous two games, the Rams decided not to run their standard full-court press. The decision by Labagh paid off, as City College played their best defense of the weekend.

“We felt like they couldn’t shoot, so we decided to pack it in,” Labagh said.

On offense, Stansberry led the team in scoring with 21 points. He grabbed eight rebounds. Stansberry had an excellent game shooting, hitting 6-for-10 shots from the field, including 4-for-6 from three.

The versatile Michael Wright stepped up, scoring 19 points, with 13 of them in the second half. A tall strong guard who has excellent ball handles, the sophomore was able to overpower defenders when driving to the basket.

Midway through the second half, Wright got the ball and blew through multiple defenders on his way to the basket. Wright finished off the play with a beautiful finger roll, the ball rolling right into the basket.

“Michael was just relentless,” Labagh said. “He has the highest basketball IQ of anybody on the court. He is always making defensive adjustments. It’s like having a coach on the court.”

The Falcons had a talented roster but got into foul trouble early. Star player Robert McCoy only played 22 minutes but scored 19 points.

Lewis Hayes continued his monster weekend for City College, scoring 17 points (6-for-10), hauling in 12 rebounds (5 of them offensive) and blocking 3 shots in only 18 minutes. Hayes was named the MVP of the tournament. The sophomore forward has scored 59 points in only 56 minutes the past three games.

“He just plays downhill,” Labagh said. “Lewis always gets right to the basket and has great footwork. He is a matchup nightmare.”

Terrell Brown, the NorCal player of the year, only had 10 points but played tough defense. All game Brown was keyed in on his matchup and was relentless going after the ball. During the Rams’ three tournament games, Brown hit 27 of 28 free throws.

In the first round, the Rams easily defeated Allan Hancock College 86-63. Their next opponent, Cerritos College, proved to be a much tougher challenge. Facing a very athletic Cerritos College, the Rams trailed 73-60 and had to claw back to win. Hayes had his best game of the tournament that night, scoring 25 points in 23 minutes, and led City College to a 89-83 win.

The Rams have won 29 straight games. It is Labagh’s third California Community College Athletic Association title. Only two players on the team were freshman guard Niamey Harris and forward Austin Harris, so the Rams will have many new faces next season.

“It is always tough to repeat, but it is our third time in 15 years,” Labagh said. “We have our guys graduating and getting scholarships, so players want to come here. If you are going to Junior College route this is the place to go.”