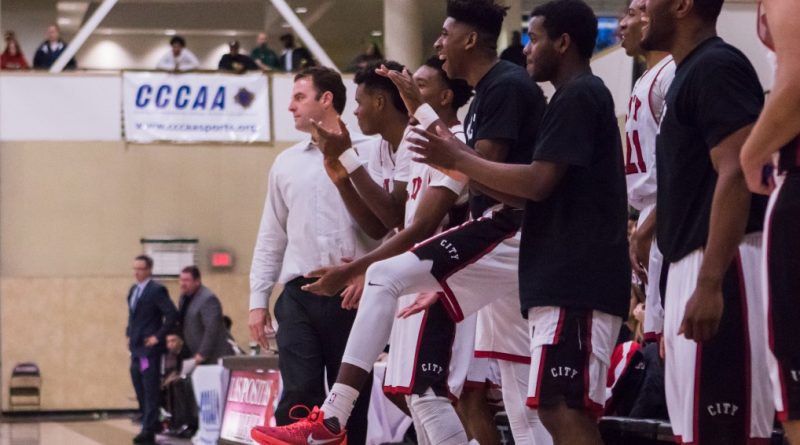 After a storybook ending to last season that resulted in a State championship celebration, the City College Rams now face the challenge of repeating it.

With three State titles and six consecutive conference championships, the team’s new faces look to carry on the winning tradition while only three players return from last year’s team, none of which were starters.

As the dust settles and the Rams’ preseason concludes, the key additions and focal points seem to be in place for head coach Justin Labagh.

Although dominant, City’s big men last season were undersized with state tournament MVP Jalen Canty and Shon Briggs, who departed for University of California, Santa Barbara and California State University, Bakersfield respectively, both being under under 6’6. Though they held their ground against Saddleback College’s two 7-footers in the State Championship, some teams took advantage of the Rams’ lack of height during the regular season.

The previous highlight-worthy point man Trevor Dunbar completed his two years of eligibility. However, Sophomore Guard Zach Copeland, who saw the most action of the Rams’ returning players, looks to take the reigns as the new premier scorer.

Copeland averaged a sensational 41.7 percent from the 3-point line last season at four attempts per game, using his long wingspan to garner a steal a game on the perimeter.

Starting alongside Copeland is another freshman in 6-foot-3-inch guard Eddie Stansberry who will take over Dunbar’s role of facilitating the offense and running the show. Sophomore Guard Armani Collins looks to play a big role, being one of the most experienced members of the team.

An open eye should be placed on freshman guards Michael Wright and Adrian Rico as well, as they have shown in preseason that there is no drop off when they are subbed in.

After ranking third in points per game in the state last year with 89 ppg, the Rams’ biggest challenge is to find out who will be the new leaders of their team.

The Rams will play in the Fresno Classic and the San Joaquin Delta tournaments before hosting their own throughout December. Then conference play will kick off with a matchup against Chabot College on Jan. 4.