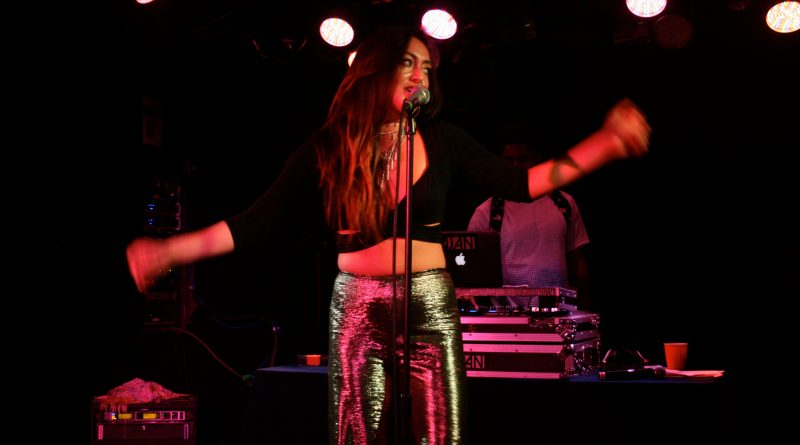 Above photo: Samantha Ouida Hyland takes the stage at Harlow’s nightclub in Sacramento on Sept. 11, 2016 (Photo by Cara Stucker/The Guardsman)

Although Samantha Ouida Hyland is not the famous warrior her middle and preferred name suggests, she has an ambition worth fighting for.

Music. Music has always been close to the San Francisco native’s heart and ears.

Ouida grew up listening to jazz greats, naming Billie Holliday as her “primary muse,” and lives by a Nina Simone quote: “An artist, as far as I’m concerned, is to reflect the times.”

Ouida’s own music is neo soul, a genre that combines current times with old school vibes.

However, as a full-time student at City College, she is a sociology major. Now 23, Ouida has decided she will earn a degree and develop a music career.

A sociology focus on paper

Sociology as a field holds significance to Ouida. As a fourth generation American and “hapa,” or person with mixed heritage, she is interested in understanding how deep relationships within societies can go.

Ouida herself was born from an Irish father and Filipina mother.

“I want to relate to other people and learn what feels relative,” Ouida said. “Community service has been a big part of my education, and community is really big for me.”

In the same vein, Ouida believes studying sociology can better her songwriting and help it reach others. Her friends and relatives have done their share of extending her music to other countries like France, Australia and Indonesia through their own circles or the internet.

Yet focusing strictly on music is a case of been there, done that for Ouida.

When Ouida was 18 she moved to New York as a high school graduate after getting accepted into New York University’s (NYU) Tisch School of the Arts.

Financial costs ultimately prevented her from becoming a full-fledged recorded music major. One year of enrollment would have costed $63,000; a complete education costed $240,000.

She completed an 18-unit semester in fall 2012 amid work, promotional live performances, a terminated business relationship with her first manager and Hurricane Sandy.

When Hurricane Sandy happened that year, it was a moment of community for Ouida and many other students without family in New York.

“We were all forced to evacuate, bringing pillows and blankets to the library, camping out for days,” Ouida said. “I ran into a friend I’d made my first year in New York and after we’d spent a few days in the dark of her abandoned dorm, we walked across the Queensboro Bridge with hundreds of people like an exodus.”

Despite the friends similar to family and abundance of passionate talent, Ouida still felt New York was cold, literally—with its snowy winters—and figuratively.

“It’s like a big pond over in New York; it’s easy to get drowned out there,” Ouida said. “You can play a million shows and not get noticed, while in San Francisco, people will start recognizing you if you go to the same place for five shows.”

But the Big Apple wasn’t without positives. “It (Tisch) pushed me to be proactive and prolific,” Ouida said.

She’s thankful for the life experience and to Tisch’s director of student of affairs, Jodi Bailey, who wanted Ouida to stay but became the person who helped her finish her last semester.

Shackles, then an interlude

Ouida gained a new manager upon her return to San Francisco, but declined to mention her name.

“I got into a contract with her when I was 20,” Ouida said. “But she couldn’t fulfill her roles.”

The female manager grew increasingly distant, leaving Ouida to message her every day, then once a week, then nothing. Furthermore, she prevented Ouida from portraying herself as a singer and as a person.

“She took my songs and tried to find a different singer to sing them,” Ouida said. “She would also emphasize my European side and try to hide the fact that I’m Asian.”

She waited for her contract to end, despite receiving offers from other labels including Sony. The ordeal dealt blows to her self-confidence.

“You either believe in yourself or you don’t. There’s no in-between,” Ouida said. “That’s why when my best friend offered me the chance to go to Bali for several months, I did. I had to work on myself, retrain myself and realize my full potential.”

In Bali, Ouida performed for free, honing what she wanted to present on stage. Reggae was popular when she visited, so she tried turning pre-existing songs into reggae ones for experimental fun.

She performed at over twenty shows and trusted herself again.

“It felt divine. I discovered Nahko Bear there,” Ouida said, citing the American musician with a mixed heritage like hers. “Nahko Bear’s famous in Indonesia and Burning Man—he makes transcendental music. I met his drummer first, then one week later I met him.”

Be a vessel, not a mirror

Since returning to San Francisco from Bali, the songstress has lent her voice to official events.

The first was a collaboration with “Walk & Roll,” a fashion show by students from City College’s fashion department held at Harlot San Francisco in May 2016. She hopes it won’t be her only City College event.

Another was her feature at Harlow’s Restaurant and Nightclub in Sacramento, where she was the second performer on Sept. 11 among a set of rappers and R&B singers. She sang her own selections of songs before performing with headliner J. Sirus on his track “Get It Together.”

The responses were very positive. Ouida said that the audience was either “dead silent listening or totally screaming nice things.”

Most recently, Ouida sang during the launch party of Seven Stills Brewery and Distillery’s new location at Bayview-Hunters Point on Sept. 16. She started with her original song “Watch Ya Go” and offered her own soulful and slightly raspy renditions of classics such as Michael Jackson’s “Billie Jean.”

It was her first paid gig. But Seven Stills didn’t have proper equipment, so she had to bring in a speaker, two amps, an electronic keyboard and microphone from Sacramento with a friend’s help.

Still, the performance was worthwhile even as her microphone experienced issues and she eventually sang a capella and danced.

“Her voice is very powerful; it’s amazing. You wouldn’t expect that jazzy style from her,” said Tim Obert, the co-owner of Seven Stills. “My fiancée says she sounds just like Amy Winehouse.”

Ouida’s voice has similarities to Winehouse. At first listen, comparisons could likewise be drawn between Ouida and other singers like Selah Sue, Adele and Lana Del Rey.

“She’s reminiscent of Lorde,” Seven Stills customer Adele Reebes said. “I thought her version of Frank Sinatra’s ‘Fly Me to the Moon’ was very nice.”

Reebes tapped her foot throughout Ouida’s 3-hour performance, emphasizing that she made frequent eye contact so Ouida knew she was paying attention.

“I don’t think it’s a bad thing she sounds like other artists,” Reebes said. “If there’s a fan for this artist, you might look for an artist that’s similar. If she (Ouida) does songs that are meaningful and important to her, then that’ll help set her apart.”

Reebes made another point regarding the pull of familiarity with a twist: “Like Pentatonix. All they do is covers, but they do it in such a way that it’s unique, so it still sets them apart.”

Notwithstanding parallels, Ouida doesn’t consider herself a copy, but a vessel.

“When you’re out there, you’re a vessel,” Ouida said. “It’s not a reflection of me; the flow is most important. As long as you can connect and let the music go through, you’ll have a good performance.”

Ouida stopped defining herself in favor of taking action. She intends to be more than a singer: she currently runs her own website Ouida Official and is her own manager, publicist and possibly merchandise designer.

She’s considering the idea of creating exclusive jewelry for fans. Concertgoers from Harlow’s asked if she has merch, and she doesn’t want to go the traditional route of providing band tees.

“I think she’s very talented and I’d like to see her succeed,” Obert said with a smile that unfolded slowly, lifting his fist halfway into the air.