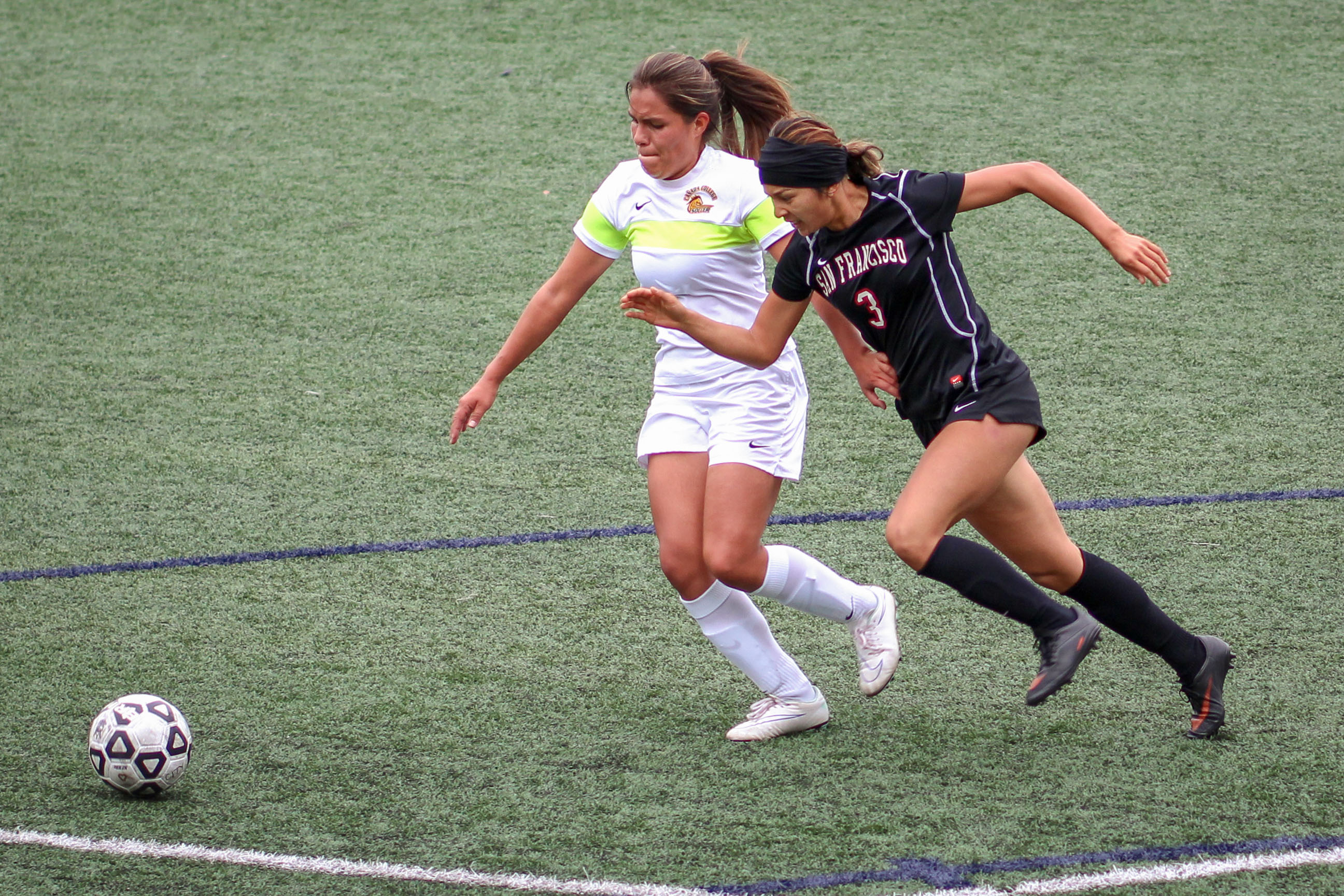 A hat trick from City College’s Jesse Bareilles propelled the Rams women’s soccer team to a 4-1 win on Oct. 27 over Cañada College.

The Rams, now 6-0-2 in conference play, dominated ball possession at the home game. The team spent the majority of the 45-minute half stripping the ball from Cañada’s defenders and pelting opposing goalkeeper Sophia Perez with shot attempts.

Freshman forward Bareilles was the first to score, earning the first of her three goals with an assist from sophomore forward Haley Rivers.

Cañada responded three minutes later with their only successful offensive attempt of the match, but the Rams were unrelenting with their scoring attempts.

At 30 minutes into the first half, midfielder and team captain Raquel Herrera passed to defender Valentina Camacho Arias, who sent the ball soaring past Cañada’s goalkeeper for a 2-1 lead.

Play halted after when Cañada’s goalkeeper took an errant knee to the head and collapsed to the turf. She lay still staff from both teams attended her. She was eventually cleared to play and spent the rest of the game in net without further incident.

In the second half, the voice of Rams freshman goalkeeper Jade Fathollahi could be heard throughout the field as she yelled words of encouragement to her teammates.

Fathollahi faced just three shots on goal the entire game, leaving her with plenty of time to sing.

Down the field, her counterpart Perez continued to face shots from the Rams. She allowed four goals off 20 shots, including two more from Bareilles.

At six minutes into the second half, Bareilles took a pass from freshman defender Rebecca Kilmartin and scored. Seven minutes later she scored again off a pass from sophomore forward Alejandra Sanchez to round out her hat trick.

“We focus on the things that are important to us, on our goals and what we value, but we don’t talk about wins and losses too much,” Saucedo said. “But it’s definitely a momentum builder when we haven’t lost in a while, so it does give them confidence. They know how to win.”

Herrera was also proud of the efforts of her team, especially the defenders.

“They talk a lot to each other, they talk a lot all game. They talk to the whole field, and push everyone up. They’re really good communicators so it helps everyone a lot,” Herrera said.

Saucedo agreed that the team works well together, saying their chemistry is their greatest asset.

“They’re so much fun to coach. They get along so well, practices are high-energy, high work rate,” Saucedo said. “But more importantly, they all get along. They joke around and hang out outside of soccer. The chemistry, more than anything, is what’s fueling this team.”

The Rams face Hartnell College on Nov. 6 and Evergreen Valley College at home on Nov. 10.