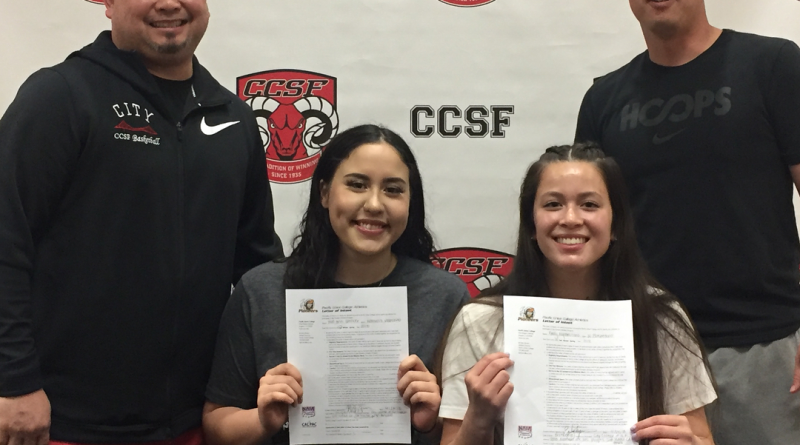 After a successful semester for Rams basketball many City College sophomore athletes have begun to choose where next to continue their student athletics careers.

Like many to come before, who walked the halls and ran on the court, the two years spent at City College is an experience that has helped propel student athletes to the highest levels of the sport, from Division 1 all the way up to the professionals.

Head Coach Derek Lau has been helping all five of the sophomore women’s players decide where to continue to play, with four of the five already committed.

Center Jordana Edwards has committed to Green Mountain University across the country in Vermont, while teammate guard Nia Ilalio will stay within the state at Cal Maritime College in Vallejo, California.

Two players will continue being teammates with guard Emily Nepomuceno and forward Helen Spencer having recently signed with Pacific Union College in Napa Valley. Having played together for two years the, Nepomuceno and Spencer will add a sense of comradery to the PUC lineup.

When asked about her experience at City College, Nepomuceno said, “Academically CCSF has prepared me for the next four years because I have taken some of the hardest classes I ever have had, which is a good thing because it has taught me to focus on my studies in order to succeed. Playing ball at City has helped me develop more skills, and strength that will definitely be more useful moving on to the next level.”

Rams leading scorer and team captain guard Caprice Taylor is undecided, and will make her decision after completing campus visits. She had received offers from East Bay, Xavier, Lady of the Lake and Humboldt State College.

Under the tutelage of Coach of the Year Justin Labagh, six of the eleven State Champion City College men’s basketball players are sophomores, making it a busy recruiting season for the Rams.

The University of Hawaii basketball has a quality player in signing All-State guard Eddie Stansberry, who shot 44.9% from the field and 42.8% from 3pt range, as well as being a solid defender.

Guard Curtis Witt is contemplating walking on at the University of Nevada in Reno. Witt, who is a crafty player and has experience in a winning program, should have no trouble contributing to the Wolf Pack if he decides to.

Undecided guard Dexter Hood has offers at Thomas University, William Penn University, and Lindsey Wilson College. With a season average of 8.8 points and 5.2 rebounds per game, Hood will bring a well-rounded set of skills to whatever school he decides.

Giving the Rams size and productivity all season long, forward Ben Borja is looking to sign at Cal Maritime College.

Showing off his athletic ability, as well as knowledge for the game during the Rams run for the state title, guard Michael Wright has chosen to play at Prairie A&M in Prairie View, Texas. Prairie View, which competes in the Southwest Athletic Conference, should make good use of Wright’s skills and basketball IQ.

Last but not least, guard Terrell Brown, named Player of the Year and the Rams leading scorer will play for New Mexico State University. NMSU is a team that has made it consistently each year to the NCAA tournament in the past decade and will benefit by acquiring the explosive talents of Brown.

Many City College athletes have high aspirations for their future in basketball, but above all this is an opportunity for them to continue their education while playing the game they love.