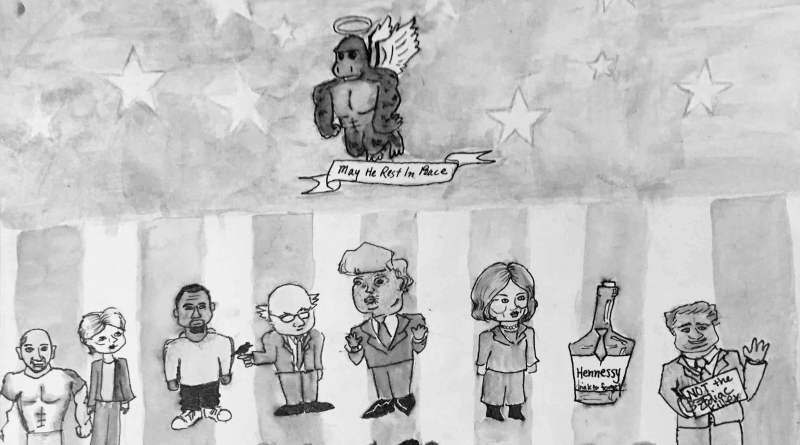 I am far from a political person, but 2016 has proven to be a game-changer following Hillary Clinton’s staggering defeat to Donald Trump.

I didn’t want to consider the possibility of her steely pragmatism losing against his incendiary disposition. It’s the biggest defeat Clinton’s faced by far.

After serving varying governmental positions for 33 years, her political life has ended without the final stage she wanted most: presidency.

I’ve done a fair share of reading on Clinton, not only because she was the first female U.S. presidential nominee.

Her ambition knew no gender. She’s always tried to maintain a balancing act between her mind and heart.

To me, her description of herself at age 18 as a “mind conservative and a heart liberal” rings true. It explains why her unfavorable pro-military and financial decisions exist alongside her favorable work with children and women.

Trump, on the other hand, doesn’t seem to have any kind of depth. I appreciate surprises, but I don’t appreciate his brand of unpredictability at all.

In fact, when he became the Republican nominee, some of my fellow millennials found it acceptable to poke fun at the U.S.’s biggest leadership role.

An unknown number of voters opted for Harambe, a former gorilla from Cincinnati Zoo, and

Hennessy Cognac as potential presidents. The numbers may not be in the thousands as previously believed, but even one for either entity is one too many.

Harambe should rest in peace instead of be used as a butt of online jokes. Hennessy should fill glasses, not ballots, and Kanye West’s die-hard fans have other kinds of music to face before 2020.

We don’t need suspense or voter support for The Rock. We need purpose.

During a February rally in Texas, Trump said he would open up libel laws to sue journalists more easily and “win lots of money.”

As a Chinese American woman dedicated to journalism, my three defining characteristics can either be counts against me or strengths about me.

I chose the latter. Trump can rest assured that journalists will do their best to avoid legal trouble—unlike him.

I’ll stand by what Clinton said during her concession speech:

On Nov. 8, 2016, the world watched the “greatest country in the world” elect Donald J. Trump as the next President of the United States.

Like most people I know, I am not happy with the election results—specifically with the electoral college. Despite winning the popular vote, Hillary did not have enough electoral votes to win.

With Trump as president, I cannot begin to imagine what will happen within our country.

I don’t see all of Trump’s policies being put in place, like having a wall built between Mexico and the U.S., but I imagine that some of them will pass.

My hope is to get through the next four years with Trump causing as little damage as possible.

I wonder if those who voted for Donald Trump have any friends who are Latino, Muslim or part of the LGBTQ community. How do you look them in the eye?

Our President-elect has labeled Mexican immigrants as rapists and criminals and said he’d ban Muslims from entering the country.

He’s appointed the most anti-gay vice president of all time and called to remove all undocumented immigrants from our country, regardless of how hard they work, how good they are or if they are separated from their families.

He’s disrespected women repeatedly on the public stage and picked Betsy DeVos as education secretary when she has supported turning public school funding into money vouchers for students to attend private and religious schools.

He can start a nuclear war without having any experience in politics prior to his election campaign, wishes to increase military spending to over a trillion dollars  and is a firm denier of climate change.

Even an Uber-using cafe regular and half-white male like me can’t bring myself to support Donald Trump. You shouldn’t, either.

This election left many people fearful for the future of the United States. However, it is not Donald Trump I fear.

There has always been racism and hatred in this country, but Trump’s presidency will lead his radical supporters to believe they are obligated to do or say what they want.

The day after Trump was elected, my colleague’s coworker was called the “n” word multiple times by a Trump supporter. Coincidence? I think not.

I’ve been covering anti-Donald Trump protests and forums since the day after the election, and I’ve witnessed many people in tears. Women angrily shouted, “How can a man like Trump be our president? A sexist, racist, bigot!”

These protests are happening nationwide. One of the outcomes include the burning of the American flag.

Though it is not illegal, it’s frowned upon—it shows how people truly feel about this country.

Recently, The Atlantic filmed a video about the White National Conference hosted by Richard B. Spencer.

Spencer’s first words in the video was “Hail Trump, hail our people, hail victory!” while some of the 200 attendees showed support through a Nazi salute.

I highly doubt the wall Trump promised during his first 100 days of his presidency will be a physical wall.

He may hire more people to guard the border and provide more jobs for the working class that way. However, the treatment of incoming immigrants under the his  administration remains uncertain.

For now, I am more conscious of my surroundings whenever I walk alone—I’m constantly watching my back.

As much as I’ve seen the doom and gloom surrounding Trump’s presidential win on social media, I’ll remain optimistic. It’s important for us to observe what he will accomplish during his 100 days in office.

America’s newest President-elect Donald Trump is heading this country in a direction that could lead to isolationism and fascism.

There is a very real possibility of the Trump administration implementing a registry for Muslim immigrants in the U.S.

The registry would require Muslim immigrants to carry cards denoting their religion and to notify the government of their whereabouts as if they were criminals.

Furthermore, The Independent reported that “The Trump administration could push ahead rapidly on construction of a US-Mexico border wall without seeking immediate congressional approval” on Nov. 16.

It isn’t a stretch to make correlations between these actions and the fascist regimes of Stalin and Hitler.

Those were two infamous dictators. Stalin’s ideas basically created the concept of the Berlin Wall, and Hitler’s made Jews, LGBTQ individuals and other groups carry special cards of identification while wearing color-coded markers on their clothing.

In many ways, this sanction reminds me of the Fugitive Slave Act of 1850 which punished free citizens for protecting slaves that had escaped from the south.

This is what the beginning of the end of civil liberty could look like. This is how oppressive political systems gain power.

This is how history can repeat itself.

The 2016 election has brought rage, fear, joy, mockery and more. All of this happened even before the U.S. president, Donald J. Trump, was elected.

Regardless of the fact that Hillary Clinton has over two million more popular votes, the only option left is to deal with a president known for racism, misogyny and hate speech.

My biggest fear has always been the economical side of the outcome. Even before the official result, the value of Mexican currency dropped, and so did the dollar.

Trump’s tax plan favored the one percent, and that means more hours of hard work for us rather than quality work.

Realizing that Trump will be the president for the next four years may help the country to move forward and be smart about actions, rather than words.