To some degree, assembling a team in any sport is like putting together a jigsaw puzzle. Coaches must understand the characteristics of the players and forecast how the players will work as a unit.

For the City College softball team, the unique piece of the 2013 puzzle came in the form of a left-handed shortstop, a rarity on the diamond. The placement of Cristina Menjivar at the critical position made it possible for other players to link around her to form a respectable season for the Rams (10-19 overall).

“Cristina Menjivar is the best softball player I have ever had at City College,” head coach Jack McGuire said. “Nobody hit the ball like she hits the ball.”

Menjivar not only led her team and conference but almost the entire state with a .543 batting average. She had more hits than all but two California players, and only struck out once the entire season.

For this and her 43 RBIs, seven home runs and all-around play on the field, Menjivar was named to the Coast Conference North Division First Team in its postseason awards.

The statistics show her capabilities in many ways, but the Rams home field without normal fences took even loftier numbers from Menjivar. Outfielders would often back away an extra 40 feet to grab some deep shots off Menjivar’s bat, or keep the hits in front of them.

“In a 200-foot fenced park, she could have probably 15 home runs. They caught a lot of balls playing back where a fence might have been,” McGuire said. “She put on some shows at batting practice, too. I mean a .979 slugging [percentage], it’s unbelievable.”

Menjivar referred to her defensive role at shortstop and the escalating effects of playing there.

“I have so much fire in me knowing I get to play the position of my dreams,” Menjivar said. “When you do well on the field it transfers to your hitting and vice versa.” 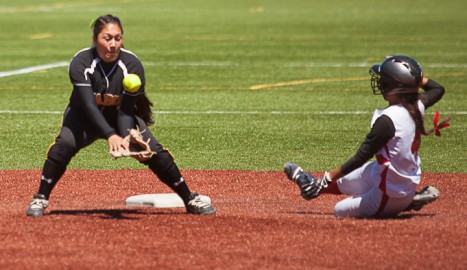 But her desire to play a position not natural for a left-handed thrower could not be matched on those teams.

“They had 30 plus players, and it was hard to get playing time,” Menjivar said. “There were girls just as talented if not better.”

Menjivar came to City College as what is known as a “Division I bounce-back,” or someone who goes to a junior college after a year on a four-year college team.

“Growing up, [MLB shortstops] Derek Jeter and Omar Vizquel were my favorite players,” Menjivar said. “When you’re left-handed, you always hear you can’t do it. I like to prove people wrong when they say a lefty can’t play shortstop. I finally got the chance.”

“Shortstop is traditionally a right-handed thrower’s position with the footwork and defensive maneuvers. Routine plays for a ‘righty’ are not often there for a ‘lefty’,” assistant coach Scott Peradotto said. “She is proficient in her craft. She became a left-handed shortstop, and that’s rare – against my better judgment. With her athletic ability, she proved she could handle it.”

The cordial head coach was straightforward about Menjivar.

“She was our best player, period,” McGuire said.

With Menjivar at short, freshman and would-be middle infielder Kaitlin Blando could bolster the team with a vacancy at catcher, and other players could play in roles more suited to their strengths.

“I was real excited to go behind the plate and catch,” Blando, who may take over for Menjivar in 2014, said. “Cristina did a great job. Cristina and our second baseman Lauren Duff were both willing to dive and get dirty to make a play and stop a ball from getting to the outfield. They were a good match out there.”

Fellow sophomore Jamie Hom played a lot of shortstop for the Rams in 2012. When Menjivar got the nod Hom roved to the outfield then finished the year holding down third base next to her old spot. Hom knew her new role was demanding, but thought Menjivar led the team by example.

“I think with her background, especially coming over from San Jose, she was already a huge player,” Hom said. “She would give people tips on getting to the bags, covering bases. I kind of liked it, having Cristina there at short.”

Menjivar’s experience and high expectations set a new standard for all players, including teammates who already had memories of success in high school, like Hom from San Francisco’s George Washington.

“I don’t think Cristina felt pressure from the team,” Hom said. “From her own past experiences she made it better for the rest of us.”

With the changes, Hom got the chance to play the same position her mother had played at third base, so the puzzle pieces worked out for her, as well.

“In the end we found a better combination of where everyone was supposed to be,” Hom said.

For her efforts at City College, Menjivar earned the softball team’s Chris Burgart Award for “excellence in leadership, sportsmanship, and athletic achievement.” Rams coaches presented Menjivar the award at the team dinner on May 3.

A lot of the inspiration Menjivar provided to teammates was one-on-one, but the sounds she made with the bat on ball also impressed.

“At one of our first batting practices for City this year, I remember Cristina hit maybe five or six pitches,” Hom said. “We hear a strange ding, and half of the bat is ripped off. She goes to the coach, and calmly says, ‘Coach I broke this bat.’ Who goes and breaks a metal bat?”

While she proved the naysayers wrong by making more than routine plays on defense, Menjivar also sought to show the value of instruction at City College.

“My dad’s always talking about going to three great colleges. City, San Francisco State and USF. He always says the best teachers he ever had were here,” Menjivar said, shining light on her dad’s encouragement to attend courses at City College when she decided to transfer. 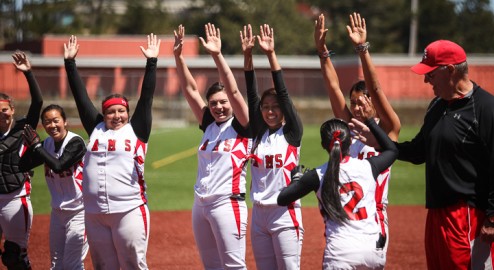 She even arranged to meet some of her father’s instructors at Ocean campus even if she wasn’t in their classes.

Cristina and her younger brother David (who volunteered as part-time batboy for the Rams) hold a sense of duty regarding academic and athletic performance.

“I really need to focus on school,” Menjivar said. “That’s the most important thing.”

She may include a year of grad school as part of her four years of athletic eligibility, with the demands she will face in labs and classrooms ahead.

Menjivar is deciding what her next stop is. With her concern for the health of people and animals and her mother’s vocation as a nurse, a natural path might be veterinary medicine, pharmaceutical studies or nursing.

With one season at San Jose State coupled with her on-field performance at City College, Menjivar knows she has more to contribute at a field to be determined.

“I have two years remaining and I’m not going to let them go to waste,” Menjivar said. “I will play again. I’m not done.”