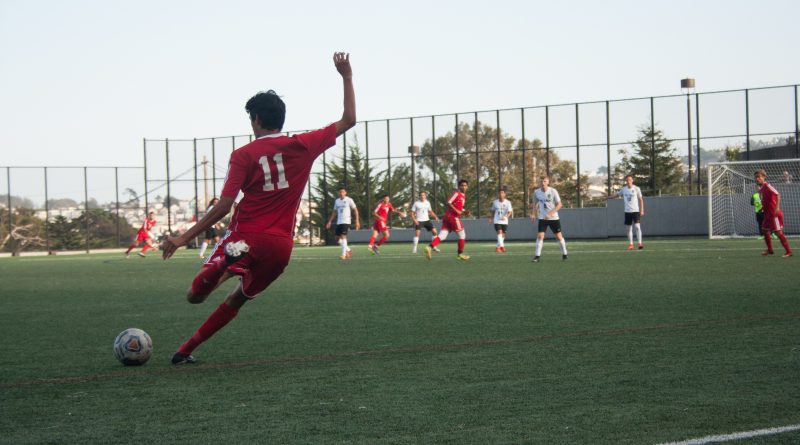 “Two good teams were on the battlefield today and one prevailed,” head soccer coach, Adam Lucarelli said of the Rams’ September 15th, 2-1 victory over Tahoe.

The tone of the game was established within early minutes of play with a goal scored by Rams #14 Karan Gurung.

“I do it all for the team and the coach,” Gurung said.

The Rams had little time to wallow in success as Tahoe’s response was swift, scoring their own goal moments later off of Rams’ team captain/goalie, Taylor Bailey.

“They’re one of the better teams, it’s a good match up, a good battle with lots of intensity,” Bailey said of the Tahoe rivals.

In fact, the intensity of the game reached so high, that midway through the game the referees pleaded with Tahoe players to curb their aggressive play.

When these pleas fell upon deaf ears refs quickly responded; first with yellow cards, then red ones, eventually resulting in a penalty kick by Rams #11 Mark Estevez that clenched the win.

“Our hard work paid off, and it showed our team’s character,”  Rams center back defender Jesus Martinez said.

In sharp contrast, when the Rams battled rival team Contra Costa on September 15th, good sportsmanship shined throughout the game.

Though a sluggish start by both teams suggested a long, slow game, the Rams eventually kicked things into high gear when a goal from Rams #9, Kareem Lacayo, assisted by Estevez #11 screamed passed Contra Costa’s goalie.

This set the pace for the game, as a second goal by #17, Alejandro Jauregui, with an assist by #16 Raul Perez soon followed.

Not to be ignored, Gurung, #14, fired off a shot, secured the team’s final goal in the second half.

Though the team garnered a decisive 3-0 victory, coach Lucarelli conceded that the game was, “not our best. We used a lot of players, didn’t play at a high level…took the [Contra Costa] team for granted, but still pulled out a win.”

Assistant coach, Jesus Hernandez shared Lucarelli’s thoughts adding that, “Any game won is a good game. It wasn’t our best soccer, there is always room for improvement…our best soccer is yet to come,” he said.

With an overall record of 3 wins, 1 tie and 0 losses, the City College’s men’s soccer team is well on their way to clench a winning title this season.