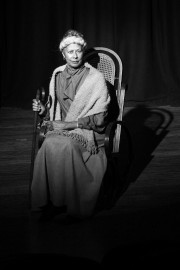 By Jandean Deocampo, photos by Leslie Calderon
The Guardsman
In City College theater instructor Susan Jackson’s newest production, a murdered waitress confronts her killer, a woman befriends a toy otter, and a marriage ceremony is attended by a basket of dolls, a Reverend in a rainbow robe and a bouquet of peaches.“4Mercy” is the latest installment of Southern Railroad Theatre Company’s “good ol’ Southern soap operas.” “4Mercy” is made up of five distinct short plays focusing on characters who are “beholden” to one another. The series debuted with previews on Sept. 13th and 14th. The formal run started on the 15th and will consist of nine performances.“The word ‘beholden’ means to be obligated, to be indebted,” Jackson said. “It goes beyond thanks. And it doesn’t always mean a good thing.”The word is appropriate. The plays largely focus on the struggles of a variety of Southern women, and the ways in which they affect the lives of the people around them. These characters are “related by blood or marriage” throughout each play, forming one coherent saga. The production is charming, warm, and exudes Southern spirit with witty writing and wacky characters. Every aspect of the room, from the few costumes hand-sewn by Brown to the small, boxed stage, risers, and low lighting promotes an inviting and audience-oriented atmosphere.

The first of the five “4Mercy” plays focuses on the emancipation of a slave girl by her former master and wife, to whom she is beholden.

Posey, played by former professional dancer Margo Sims, is the troubled main character and former slave in “Heathen Part Two,” which starts with Sherman’s March to the Sea and ends in the Depression era.

Adrienne Krug, New Englander and well-rounded Bay Area actor, plays the character of Lacy, an abandoned girl who grew up having to rely on herself and few others, and who eventually falls into a self-deception involving a childhood crush and a toy backpack. 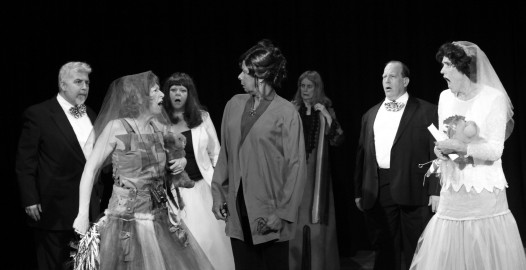 “Susan, is in our estimation, a great writer,” said Diana Brown, co-founder of the company and an actor in many of the company’s plays.“A lot of people have misconceptions of the South,” Jackson said, explaining that some think “Southerners are illiterate and moronic, right-wing religious zealots and racist. I want to show that this world of obsession with food metaphors and toys treated as real creatures can be compared to the West Coast’s obsession with food and social concern for the disadvantaged.  Different approaches to dealing with life, but one is not necessarily better than the other.”“It was the South that got Obama elected,” Jackson said. She plays Marion Peallin in “For I Am Not Breaking,” centered around a chance meeting at an airport bar and full of contemporary commentary, involving everything from sex changes to William Carlos Williams.

One of the interesting parts of the production is the timing of the content in the play. Jackson didn’t expect her references to 9/11 and Clint Eastwood to coincide so neatly with current events.

“It was simply fortuitous,” she said, referring to the timing of the recent, national political conventions.

The whole production aims to honor the company’s goal of reflecting the true spirit of the South “one hush puppy at a time.”

2BEHOLDEN will run every Thursday, Friday and Saturday at 8pm during September at Royce Gallery, located on the corner of Mariposa and Harrison Streets.