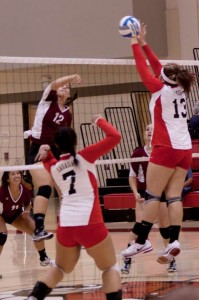 City College Women’s Volleyball, seeded No. 9 in Northern California and No. 23 in the state, played their first match as a ranked team against De Anza College on Sept. 30.

The two teams, who tied for second place in the conference last season, went to five sets in City College’s second match of conference play this season.

In the first set De Anza lead the entire way, winning 18-25, with City College showing a lack of ability to score.
The City College Rams responded well with a strong performance in the second set winning convincingly with a score of 25-13. But they could not play well consistently, showing a lack of focus when they committed a rotation error, resulting in a 22-25 loss in the third set.

During the fourth set the Rams were able to capitalize on a knee injury suffered by one of De Anza’s best hitters, Katrina Parik, finally winning 25-21. But the De Anza Dons regained composure, ending the fifth and final set 5-15 on a 9-1 run.

City College did show some life from their strong outside hitter, Nicole Lee, who finished with 12 kills, while middle blocker Ramona Vae was also able to control the front of the net with her blocking. But the defensive miscues were just too much to overcome.

“Collectively that wasn’t our game,” Ramona Vae said. “As a team we all played down. The talent’s there, it’s just a matter of us playing as a team. But as soon as we get all of our girls we got it.”

The Rams have been recovering from injuries suffered when four players went down during the San Jose City College tournament on Sept. 24.
Despite Christina Lopez coming back from being out the previous two games, they were still without their top outside hitter, Nicole Yap, who has been sidelined this past week with a sprained ankle. The team has gone 2-2 in Yap’s absence.

“It’s definitely frustrating to have to watch these games,” Yap said. “I mean I can’t do anything about it but be encouraging to them. As soon as I’m on the court I know I’ll need to step it up for the team.” As for a time table on when she may return, she hoped it would be sometime next week.

Head coach Saga Vae felt his team did not bring forth their best effort in this match and believed Yap’s absence had something to do with that.

“We were very inconsistent with our defense tonight, and our game plan did not go through well either,” Saga Vae said. “Our leaders didn’t step up and it clearly showed. We’re not only losing our best hitter, but Nicole is a good influence on the girls on both the back and front lines.”

Saga Vae also said he felt his team’s effort in this match did not reflect how they had been doing so far this season.

“We just didn’t show. We are a lot quicker, faster, and we make bigger plays than this,” he said. “We played their game and it should have never went to five sets. We have had girls in and out of the line-up which makes it much harder to find a rhythm.”

The Rams (11-4, 1-1) also hosted a tournament this weekend in which they beat both Siskiyous College and College of the Sequoias.

Their next match will be on the road against San Jose City College on Oct. 5. Tip off is at 6:30 p.m.