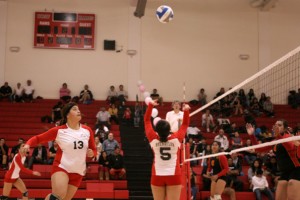 Despite a handful of losses that resulted from injuries, the Rams’ volleyball season is a success and during their match against Skyline College the squad was healthier than they’ve been in weeks.

Rust was not a factor as City College showed their full team’s capability throughout the match when they swept the Trojans, 25-19, 25-11, 25-8, on Oct. 12, at the Wellness Center.
The Rams (13-5, 3-2) were able to overpower their opponent at the net, but sophomore outside hitter Christina Lim was not happy with her or her team’s performance during the first set.
“I knew I wasn’t reaching and my timing was off,” Lim said. “Then my coaches and teammates were able to give me some good advice and we were able to fix it by the second game. That first game we were still warming up and it took us awhile to find our rhythm.”

After the first set saw several serves from both sides hit the net, fellow outside hitter Nicole Yap was able to save the team with four straight aces to start a 6-0 run for City College, allowing them to control the rest of the game.

Yap also recorded five kills in her first set playing since she sprained her ankle on Sept. 24.

“My ankle is still a little swollen, I’d say I was about 65-70 percent out there,” she said. “I wasn’t really expecting to play in this game at all. I thought maybe back-up at the most.”

The Rams completed the other two sets in dominating fashion and only gave points to Skyline’s because of errors.

The win against Skyline (5-10, 1-3) pushed the Rams into a second place tie with Ohlone College in the Coast Conference North Division. Even with the win, Head coach Saga Vae said, the squad needs to remain focused.
“We know we got to take it one game at a time,” Vae said. “The confidence level is definitely coming back especially with Nicole [Yap’s] return,”

Vae also said that Nicole Lee is still coming off a shoulder injury and the team is almost back to full strength.

“We played the No. 1 team in the conference last week and the girls gave them a match with us not at 100 percent,” he said.

During the match, City College promoted Breast Cancer Awareness Month by decorating the gym with pink banners, balloons and a raffle where fans could win prizes.

The Rams will travel down the peninsula on Oct 21 when they look to get some retribution from their first loss against De Anza College on Sept. 30. Tip off is at 6:30 p.m.