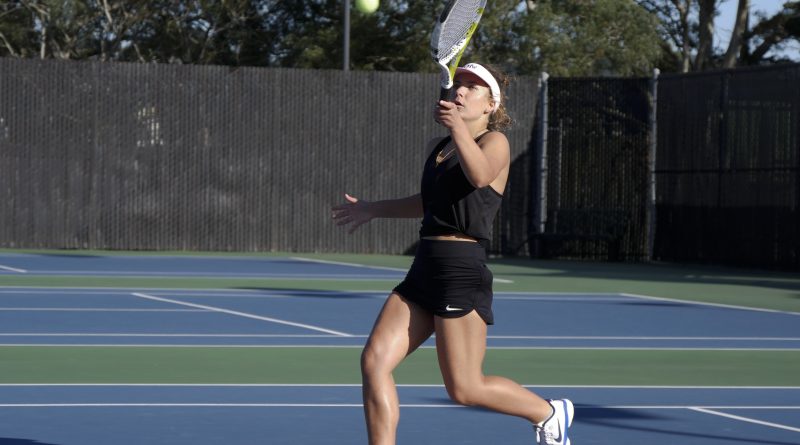 With this win, the Rams are now 5-3 overall and 4-1 in conference matches.

In a match where the cold, windy weather tested the resolve of the Rams team, they were able to put together a great team victory.

Despite missing their No. 1 ranked doubles and singles player, sophomore Zee Aynaci, several players were able to step up. “They did a good job of handling their business on their court,”  Head Coach Kelly Hickey said of her team’s effort.

After doubles, the Rams led 2-1 over Mission, with one win by default, since their opponents failed to field a full roster of six players.

In singles, the Rams cemented their victory over Mission with a 5-1 domination, again with one of those victories coming as a win by default for the same reason as in doubles.

In singles play, Claudia Houdre, who did not experience defeat all day, won 6-0 and 6-0 in quick succession against her opponent, allowing her teammates to focus on their game strategy.

“I ran a lot, missed some points, had some really good shots…,” Claudia said when describing her victorious 6-0 performance.

At the same time of Houdre’s great performance, there were also two action-packed comebacks by Caroline Olander and Aliza Sundberg, who did not participate in doubles play.

Olander had fallen behind in what seemed to be an inevitable loss, until she miraculously scraped out a 7-5 victory, demonstrating her grit and perseverance. She would go on to win her second set 6-0.

Sundberg, too, had fallen behind during her first set, but, like Olander, was able to guarantee a 7-5 victory for herself and her team in what she described as “a major comeback.”

For Sundberg’s second set, all her teammates had finished their play and were cheering her on in support, ultimately, driving her to defeat her opponent 6-3 in the final set of the entire match.

“In the second set I felt pretty good. It was a really good match. I feel proud of myself,” Sundberg said shortly after the match was over.

In the Rams’ other two singles matchups, Yvonne Ng was unable snatch a set from her opponent, while her teammate Abigail Campos did a very good job of winning her sets 6-3 and 6-0.

After the match, Head Coach Kelly Hickey said, “Overall, I was pleased with it. I thought we needed to make some adjustments at number one doubles. I thought we lost focus there in the end of their pro-set, but by the time we got to the singles, I think everyone regained their focus… So, even though this is a team sport, you have to take care of what’s going on on your court, and I thought they did a beautiful job.”