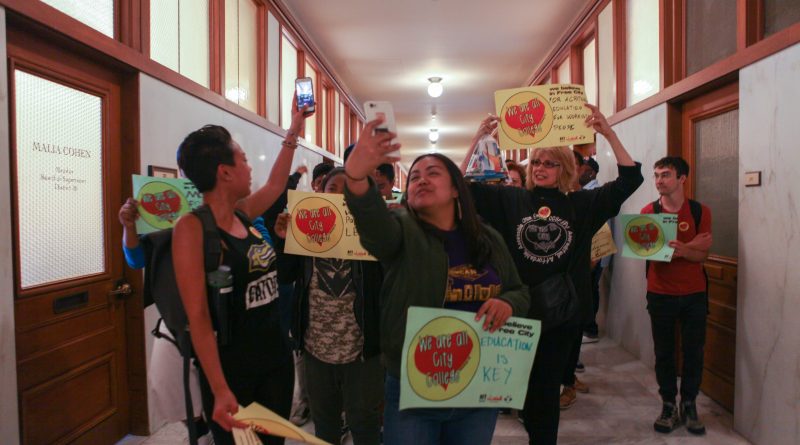 City College and its faculty union, AFT 2121, have finally reached a contract agreement after a year and a half of failed negotiations.

The deal comes after negotiations started to ramp up last Friday following a fact-finder’s recommendation for the two sides to return to a mediator for the talks. Per a press release from AFT 2121 President Tim Killikelly, City College faculty are expected to receive an 11.4 percent increase in salary by the 2017-18 school year.

During the long and contentious negotiations, both sides accused the other of unfair bargaining. The division between the two sides became most apparent during April’s faculty strike, the first time the union had ever gone on strike

“Our united power was clearly demonstrated during our high-participation strike,” Killikelly said in the press release, “which was supported by community, students and elected officials, and moved the District to make a deal before the issuance of the fact finding report.”

The majority of the increases in salary will be incremental throughout the life of the contract, which will be re-negotiated after the 2017-18 school year. If, at that point, certain enrollment growth targets have been met, the salary increases will continue at the current agreed upon rate.

AFT 2121 felt comfortable moving forward with that clause, in part, because of the anticipated success of the Free City College proposal that is planned to go in front of voters in November. Overall enrollment numbers are expected to spike if the free tuition proposal passes.

One of the big pieces of the negotiations has been the District’s desire to be able to cancel classes that have low enrollment numbers. While the union was unable to lower class size minimums, they were able to stop a concession that would have it made it easier for the District to cancel low-enrolled classes.

In a statement released Thursday afternoon, Interim Chancellor Susan Lamb notes her excitement in being able to move forward following the agreement.

“We appreciate the willingness of AFT and its leadership to engage in an intensive fact-finding and mediation process in an effort to understand and resolve our differences,” Lamb said.

Just two weeks ago, Killikelly had mentioned that another strike was certainly possible should a new contract not be forged before the start of the fall semester.

Following the struggles of the past four years from the accreditation crisis to a special trustees board to labor negotiations, it appears City College will start the 2016-17 school year with a little more stability.

“During the last few years faculty at City College of San Francisco have gone above and beyond to defend, improve and rebuild our College,” Killikelly said. “This Tentative Agreement will support faculty in delivering quality and accessible public higher education.”