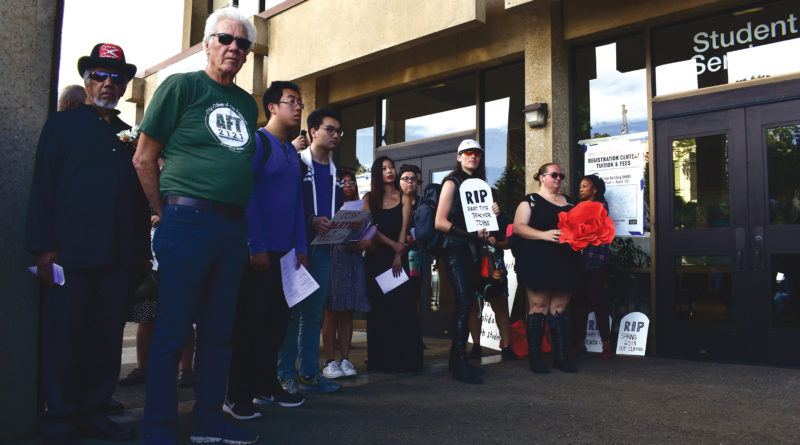 Students and faculty gathered outside of Smith Hall last week to raise their voices about how class cuts have negatively affected City College students.

On September 25th, everyone gathered at RAM Plaza where a mock funeral, advertised as “A Celebration of the Life of City College of San Francisco: Death By a Thousand Cuts”, was held to point out the failing educational hopes and dreams of students.

The protest was hosted by City College’s Higher Education Action Team (HEAT). Included in the memorial was live music from the CCSF Labor Chorus and the words and artwork that was brought out were from the students and faculty here on campus.

As the protest began, four men dressed in all black arrived at RAM Plaza and ventured in carrying a cardboard casket with ‘RIP’ written on top. Sizable paper flowers and gravestones were set up across the courtyard with phrases like “Part-time healthcare” written on them to express what students have lost since class cuts began last year.

City College student, Marcos Cruz, gave a speech about how the college should be trying to obtain more funding from the state to increase the amount of classes offered, instead of using funds that could procure more classes for administrator raises.

He pointed out the hypocrisy of California being the most wealthy state, but not having enough money to fund its own community colleges.

Several community members walked around handing out flyers with event programs and lyrics to the live music that was played so that attendees could sing along. Protesters held posters that said “My tuition is for college not for admin pockets” and “stop killing our college.”

Engineering professor, Wynd Kaufmyn, left the crowd with a speech that had a more hopeful essence to it. She believes that it is possible for City College’s administrators to unite with students to solve the budgetary crisis without hurting students in the process with cuts to resources like libraries and resource centers.

The protest concluded by attendees marching towards Conlan Hall where the protestor’s demands were read. These included no classes being cut until the second week of the term, no class with 15 or more students enrolled being cut at all, and that administrators include student input in their decision making process.