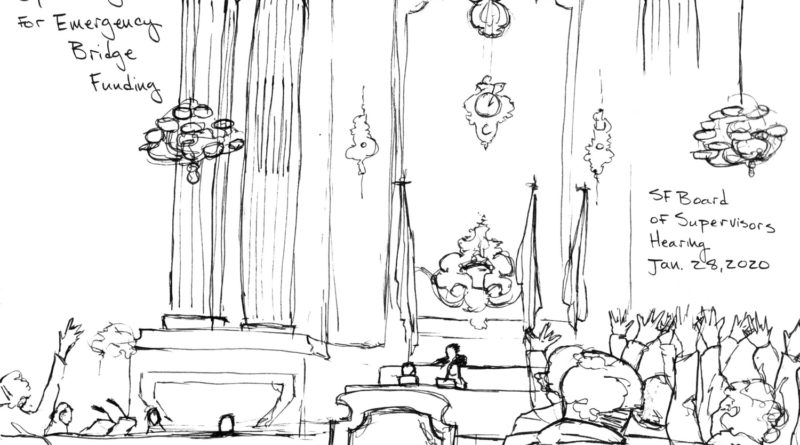 The emergency bridge fund of $2.7 million dollars was approved by a 7-4 vote at the  Board of Supervisors meeting last Wednesday, but failed to get enough votes to avoid a possible veto by Mayor London Breed.

Various students and faculty groups joined in North Light Court at San Francisco City Hall before the meeting took place last Tuesday to show their support for the vote on the $2.7 million emergency bridge funding to revive cut classes.

All of the board members upheld the common belief that the City College is a significant and vital part of the city, but expressed their worry of how the bridge funding would be used, saying that there must be a big discussion and conversation over the mismanagement of finances by the city college.

Board President Norman Yee expressed his concerns for City College’s management and spending of the money, on the account of the San Francisco Unified School District having trouble with financial management in the past before.

“What I’ve seen over the many years is that City College is unable to manage what they have and get themselves in trouble,” Yee said. “It was difficult during the time the school district was in trouble with the deficits. If we hadn’t made hard decisions at that time to close out certain schools, the school district may have not bounced back to what it is now and continued overspending.”

“It wasn’t easy then when I had to make those decisions and today it won’t be easy for me to take a no vote on this,” Yee said.

Supervisor Shamann Walton in favor of the emergency bridge fund said the appropriation of the fund would benefit the college despite the worry of how the funds would be utilized by the college.

“These are not just supplemental resources that give City College a blank check,” Walton said. “This is specific to the preservation of classes that were cut.”

Walton believes the funding is important to the city college to be used for the classes that were abruptly cut with no outreaching to the students or faculty for discussion beforehand.

“Yes, this is a one-time bridge funding opportunity to restore classes that we need to be preserved while we have a conversation,” Walton said. “You don’t just cut classes, throw students out, cut jobs, and then say that it without a conversation where the city can get involved.”

Faculty member Leslie Simon said she hoped at least one supervisor would “make City Hall history” by changing their “no” vote to a “yes,” when the Board takes its final vote on Feb. 4. If no one changes their vote, however, it will be up to Breed to approve or veto the funding. A representative from Breed’s office did not respond to a request for comment.

One thought on “Bridge Funding Falls Short of Veto-Proof Majority”