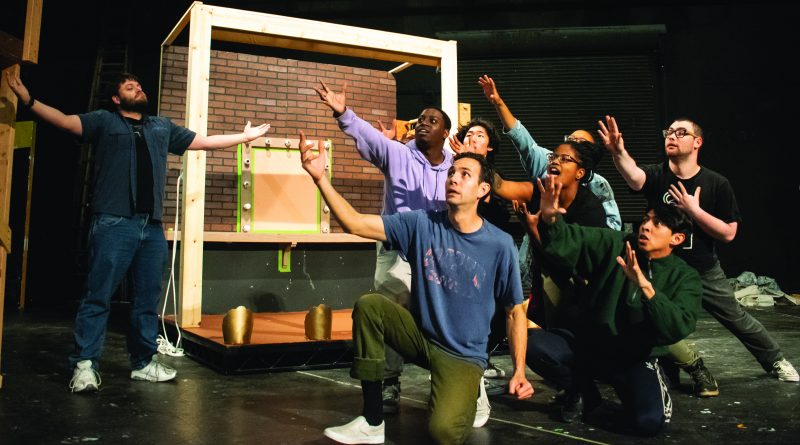 The Cradle Will Rock is an ambitious theatrical adaptation of the Tim Robbins film that will be opening at City College’s Diego Rivera Theatre on Friday Oct. 26. Set during the Great Depression, the play weaves together the historical events and entertaining fictions to tell a lighthearted comedy about dark times.

During the ’30s as part of the Federal Theatre Project, Orson Welles tried to direct a play called “Cradle Will Rock” about a steelworker strike, but was shut down at gunpoint when officials decide the play is too left-leaning for federal funding. At the same time, Diego Rivera was commissioned to paint “Man at the Crossroads” for the Rockefeller building in New York City. It was later painted due to its controversial, left-leaning nature. The play tracks these two events in American history and weaves them together.

“It’s about censorship and the arts and the government’s relationship to people through that lens,” director Patricia Miller said.

Although the play takes place during the ’30s, there are many parallels to modern times — police brutality, rise of fascism facilitated by corporate interests, a sharp divide between the haves and have-nots. For City College, there is an especially close connection at the heart of this story: a mural by Diego Rivera.

Currently, there are plans to move Rivera’s “Pan-American Unity” mural from the Diego Rivera Theatre to MoMA while the college builds a new Performing Arts Center. “We’re fighting to keep it [the mural] here at City College,” said Miller.

The play has an cast of 36 actors, ranging in age from 9 years old to 70 years old. Although many of the historical figures featured in the play were white, the cast reflects the diversity of City College.

“I’ve never seen so many people work so hard to be in the room,” said Miller of the cast.

Despite the heavy subject matter, there’s a thread of humor that binds together the play and will have you laughing in your seat.

The play opens this Friday, Oct. 26, at 8 p.m. It will be open for two weekends with 8 p.m. showings on Fridays and Saturdays, and 2 p.m. showings on Sundays. The final performance will be Nov. 4 at 2 p.m. Tickets are $15 for general admission and $10 for students, seniors and TBA members.