As campaigning finally comes to a close and this year’s election nears its end after a record-breaking voter turnout, Donald Trump still refuses to concede to Joe Biden and Kamala Harris president and vice president-elect. A bitter divide splits the nation. 72 million of our fellow Americans voted for Trump, earning 7 million more votes than in 2016. If we are to celebrate this victory for progressive action for the next four years, how will these executives or their administration actually accomplish reunification?

What this election and the last four years has indeed taught us, I believe, is: there are so many more folks still not getting their human needs met (pre/post-pandemic). Folks like women, immigrants, and LGBT, and folks like rural poor people and non-college-educated white folks have also not felt their human needs being met by the current structure. 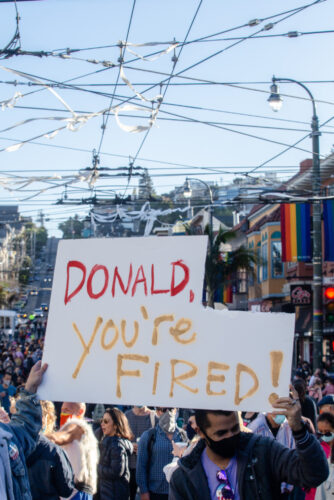 Even our opponents have human needs. Belonging, dignity, safety, every person needs these, and to put anyone over the other leads to trauma. For example, compromising dignity to feel safe leads to trauma. Perpetuating violence like toxic masculinity to feel proud or a part of the group generates trauma. Unfortunately, many of our opponents have found their human needs met in coercive hate groups. Our opponents will not simply disappear just because we can block them from our feed. And our opponents have human needs that our government is also not providing. If we can use this moment as an opportunity to realize that while winning the presidency is one step, the more significant work is our recruitment issue.

An election splits a nation, and it has always been up to the incumbent to gather back the people after the split the campaign causes and fuse the public back together again. That will not happen after this election as Trump is determined to drag out his losing process as long as possible at our expense. As sad as it is, the work nonetheless remains, and again, we will not wait for politicians to heal our communities or our relationships.

Poor folks, disabled people, undocumented people, incarcerated people, people of color, and marginalized folks have never waited for the “right candidate” to show up to get them what they need to survive.

A strategy called Mutual Aid, championed by the work of Dean Spade and long employed since Hurricane Sandy when people spontaneously deployed to serve their own and total strangers’ needs horizontally without a top-down hierarchy orchestrating the effort. Folks banded together over their commonly shared human needs and collaborated, even if they didn’t share 100% of their ideals.

For example, an opponent is anti-immigrant. But you later learn this person also shares anti-police brutality views. Maybe they were abused by police at some point and need authority to stop brutalizing them. If our peers supported us, could we not possibly meet an opponent on a shared need and work through that and see how their needs and other marginalized folks’ needs are shared and that we can help those who share our needs. Do we not need to develop this skill for our survival?