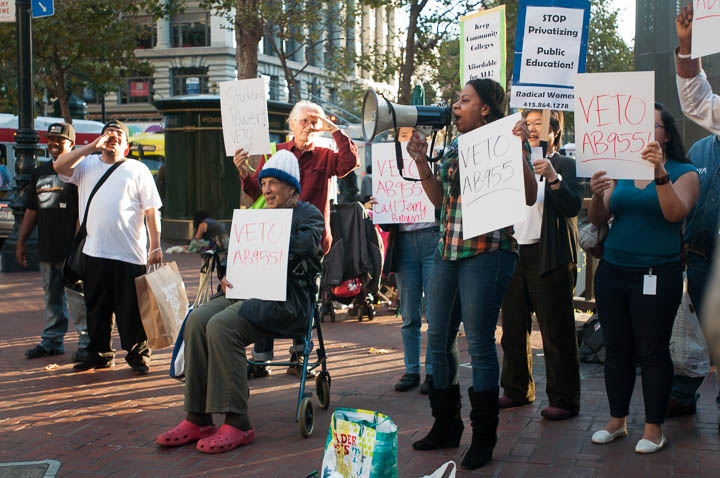 Over 20 students and faculty gathered Sept. 24 at the Powell Street BART station to demand that Gov. Jerry Brown veto Assembly Bill 955, a bill that would charge community college students more for intersession courses.

City College students and faculty were joined by students from Santa Rosa Junior College and Solano Community College in chanting, “No cuts no fees, education must be free,” and carried signs that read, “Stop Privatizing Public Education” and “Student Power Veto AB 955.”

Messer announced Gov. Brown’s phone number through a megaphone, using a repeat-after-me chant to encourage people to call and tell him to veto AB 955.

Authored by Assemblyman Das Williams, D-Santa Barbara, AB 955 would establish pilot programs at six community colleges to offer classes in the intersession summer and winter periods at the non-resident price per semester unit of approximately $200 compared to $46 for residents. Students are afraid it will set a precedent for other colleges.

“AB 955 is another assault on the working class and goes against the California Master Plan. The Master Plan was truly a human document,” City College transitional studies instructor Rodger Scott said, referencing California’s 1960 educational plan that guaranteed equal access for all regardless of economic standing. The plan was signed into law by Gov. Brown’s father, Gov. Edmund “Pat” Brown.

Robert Edmonds of Santa Rosa Junior College and student representative of Region 3 of the Student Senate of California Community Colleges spoke about the student senate passing out nearly 2000 pounds of food to students “to help those who are being forced to choose between eating or education.”

“If the administrators prove this pilot program works, they might resort to it when Prop. 30 runs out in six years,” Edmonds said.

Casey Bess, a biology student at Solano Community College and member of the Associated Students of Solano College, held a sign that read “AB 955 Mind Your Own Falcon Business – ASSC.”

“Solano College doesn’t want to set a precedent, because we don’t want this bill,” Bess said. “The ASSC have passed a resolution and made a statement of strict non-support.”

Williams said that more actions are being planned.

“Governor Brown knows what this is about,” Williams said. “If he doesn’t veto AB 955 he will show that he is not a supporter of equal access to education.”