“Sellout” reads oversized, bleeding spray paint in front of the Berkeley Art Museum and Pacific Film Archive, where City College alumnus Barry McGee is exhibited.The exhibit is both an homage and a dissemination of the Mission District where McGee grew up and where his graffiti was inspired by gentrification and street culture since the 1970s.Hobo art in black paint represents the Mission District’s street culture, painted enormously along the bright red walls.Among other tools, McGee uses spray paint, acrylic paint, and even liquid markers to create his work.

At 46, McGee’s mid-career solo exhibit feels like a retrospective, with the artist claiming a new voice in a rapidly-gentrifying culture that he intends to critique.

McGee’s characters look anguished, depressed and frustrated with the lower class urban life of which they are a part.

Some of his most sought-after work was created at 16th and Mission streets. Most were either purchased by collectors or painted over by the city.

Attention from the Venice Biennale in 2001 significantly increased the worth of and demand for his work. Former fans called him a sellout.

His critics reference private collectors shelling out between $25,000 to $500,000 for his installations, including those which have been put on display at London’s Tate Modern’s 2008 mural commission or the Museum of Contemporary Art in Los Angeles’ major survey of the street art movement in 2011, where his art was a centerpiece.

“Whenever I do stuff indoors, I always feel like I have to do 110 percent more stuff outdoors to keep my street credibility,” McGee said in a PBS Art:21 documentary.

In a collection titled “Self and Others,” bare chested men scramble on their hands and knees, their open liquor bottles beside them, a look of both helplessness and somber desperation in their eyes.

The exhibit’s installations are raw and unrefined, easily interpreting the street culture that inspired McGee’s work.

McGee is also renowned for his immersive, interactive installations.

One installation is a bail bond shop made of wood, complete with dirty, wire-covered windows.

Peering through an opening reveals an intricate and unabashed slice of Mission District urban life. There is a desk strewn with papers, documents and dusty books. Frames featuring McGee’s bright, multi colored textile work dress the dinghy colored walls. There is even a beat up couch with a twitching loafer-clad foot peeking out of a blanket, giving the impression that someone sleeps inside.

His famous hand painted signs featuring his monikers Twist, Ray, and Lydia Fong can be seen on the floor of the exhibit as well as atop some of the installations.

Street art is “like the highest art there is,” McGee said in the PBS documentary, dismissing conventional art forms. His street art has also included life sized, humanlike robots dressed in hoodies and dirty sneakers standing on ladders, painting graffiti on the walls.

McGee is frequently quoted describing his Mission inspired artwork as “urban ills, overstimulations, frustrations, addictions and trying to maintain a level head under the constant bombardment of advertising.”

One installation perfectly befits this description.

A large mountain of television sets of various sizes are stacked upon one another as each screen plays a different scene. One screen displays gang violence, complete with gang signs and brutal beatings. Another screen shows a graffiti artist hard at work on an alley wall, another a bright, flashing montage of different characters created by McGee. He sheds a genuine light on the life of the Mission District even when it is a harsh one.

Despite his successes McGee’s heart has remained rooted in the city he calls home. The artist currently lives in San Francisco’s Mission District with his wife, artist Clare Rojas, their daughter Asha, and their dogs Pinto and Maddy.

In his current exhibit, a glass display is filled with MUNI bus transfers, pictures of a bus and common Mission District remnants such as event flyers and bus stop signs.  There are even cut-off dreadlocks.

“Compelling art to me is a name carved into a tree.  Sometimes a rock soaring through a plate of glass can be the most beautiful, compelling work of art I have ever seen,” McGee said in a book titled “Barry McGee: The Buddy System.”

His art stems from real life.  Not only has Barry McGee stayed true to his roots, he reminds us of ours. 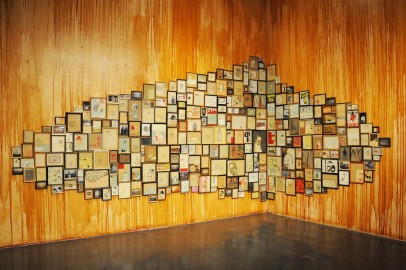