Skip to content
Feature News Board of Trustees
October 3, 2012February 25, 2020 The Guardsman board of trustees, election, CCSF, deocampo, BOT 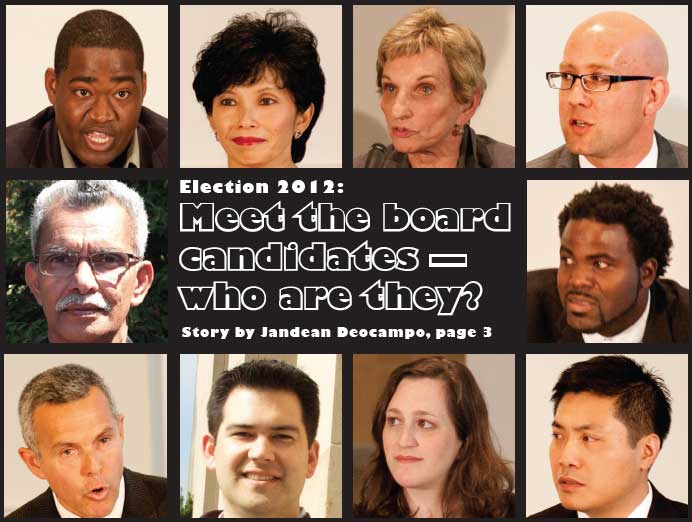 By Jandean Deocampo
The Guardsman
In Ocean campus’ Multi Use Building, candidates and Board of Trustees members gathered on Sept. 19 in front of an audience of camera crews, concerned students and voters for a Q&A Forum co-sponsored by the League of Women Voters of San Francisco and Educational Access Television.

Attendees conversed excitedly among themselves, while television technicians rushed to test sound and video. Only the noise of cameras going off matched the rustle of papers being shuffled around.

The questions, provided by the audience, were gathered by League members and sorted to the side of the moderator’s podium.

A long table with placards and microphones announced the names of members and candidates who would be in attendance. A smaller table faced them, seating the team of timers who would keep track of answers.

Charismatic candidate Rafael Mandelman cruised around the room, chatting up most of the audience and carrying a large stack of campaign handouts that urged voters to “Save City College.” Amy Bacharach, another candidate, made small talk in several small groups.

Others were more relaxed. Hanna Leung paced slowly outside of the conference room and student trustee William Walker stood joking in a corner and eating french fries.

The forum finally began 30 minutes after the designated time to start. Natalie Berg, along with fellow incumbents Chris Jackson and Steve Ngo, sat in their places next to the other representatives.

Moderator and League member Allyson Washburn took the podium and introduced the questions for debate.

Some of the questions were standard for anyone who had been following Board decisions over the past six months. The forum naturally gravitated around the issue of leadership and decision-making in the wake of City College’s accreditation crisis.

“How well do we direct our resources to fulfill the mission statement?” Ngo said. “Recognize and close the achievement gap.” This is the second time Ngo is running for the board.

The issue of revenue and finances was brought into question, and the candidates offered mixed contingency plans in the event of Prop 30 and Prop A failing.

“In the event that they don’t pass, we have to go back to employee groups to ask them to sacrifice even more,” Jackson said. “We need to meet our base enrollment. It’s costing hundreds of thousands, if not millions of dollars. It’s a very simple step.”

Rodrigo Santos, a structural engineer who was appointed by Mayor Ed Lee in August to fill the remainder of the term for the late Milton Marks III, referred to the possibility of closing campuses or other instructional centers leased by the college.

“We will have to assess the use of facilities we currently have,” Santos said. “There’s the possibility of consolidation. Everything will have to be on the table.”

Representatives generally agreed to fiscal realities. Cuts have to be made and hard decisions are inevitable. Inconsistencies should be eliminated but bankruptcy is definitely not an option.

“The choice is not whether you’re going to lose a limb,” Ngo said, responding to a question about crisis strategies conflicting with the interests of City College labor unions, “but which limb? And that’s just reality. We need to make long-term, permanent reductions. I’m confident that everyone knows what’s at stake.”

Issues of leadership in school administration were addressed, as well as the desire for student representation and their transparency in board decisions for the school. Power and control, and the fair use of both, dominated the debate.

In response to a question about the voluntary special trustee and whether or not it was a rushed decision, Walker said, “There’s a problem with the inertia of this institution, an inability to make decisions in a timely manner.”

The ineffectiveness of the shared governance model prompted the representatives at the forum to question its value. Some argued that it slowed the decision-making process, while others supported the model and blamed its recent failures on corruption.

A question about priorities gave the board brief pause. They bounced back quickly enough with the unanimous response that above all, the students’ needs must be met.

“Many in the college community are concerned that the board is not responding to the negativity of the media with positivity,” said Washburn, in the final question of the night. “How will you help improve the image of the college?”

Walker: “We need to be creating events that really allow our communities to stand up.”

Bacharach: “Build a strong alumni network. We need to create a mechanism for them to give back.”

Berg: “If a lot of people wrote letters to the editor (of The Chronicle), that would be good. It would have impact.”

Jackson: “You maintain and improve the image by investing in the communities.”

Leung: “We need to show San Franciscans we can get out of this hole.”

Ngo: “I know how great City College is. I think most San Franciscans have had that experience with City College. There’s been a fire for twenty years, and people are still talking about the drapes. Focus on students again.”

The Forum closed with applause and statements from the candidates and trustees. Each member presented repeated echoes of “I believe” like a mantra in their hopes for City College’s future.