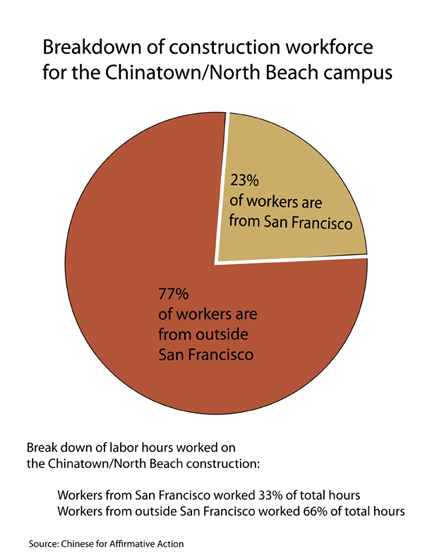 By Emily Daly
The Guardsman

Construction updates presented at the March 10 Facilities, Infrastructure and Technology Committee meeting revealed past delays are affecting the budget of the Chinatown/North Beach campus project and the start of construction on City College’s new performing arts center.

Three Chinatown/North Beach contractors are requesting additional funds under resolution B2, also discussed at the meeting.

Apex Testing Laboratories, Inc. and ISI, Inc. requested a total of $643,520 for an extension of special inspection services and testing mandated by the DSA.

EHDD Construction and Barcelon & Jang requested an additional $384,698 for the five-month extension of their original contract agreement, bringing the new contract amount to $14,745,035.

Board president John Rizzo said the delays occurred shortly before construction began, when former Vice Chancellor James Blomquist started the contractor bidding for the project before getting the state’s approval. When Blomquist left, all the contracts had to be rebid. A similar situation affected City College’s soccer field, Rizzo said.

Andy Sohn, a representative from EHDD construction, said the request for more payment is related to the additional meetings and staffing required because of these delays. Sohn said the contractor feels they are entitled to it contractually, since the schedule change was out of their control.

“I’m open to be persuaded, but I haven’t seen the evidence they are entitled to it,” said Rizzo.
Rizzo expressed concern that tasks such as additional meetings would cause a change in the contract. He said if the company asks for additional money a third time, the board would inquire if delaying work on the project would equal a breach of contract.

“What we did not do in this case was simple math,” Sohn said. The contractors came up with the new payment by identifying extra tasks they had to complete, instead of multiplying the current payment by the additional length of time the work is expected to take.

Rizzo said any future budget cuts would not affect the North Beach campus, but could affect construction on the Performing Arts Center, which is partially funded by bonds from 2001 and 2005. The state of California doesn’t have the bond money, which is why construction on the project hasn’t begun.

Rizzo said the deal was agreed to years ago, and there are no disagreements, controversies or problems in the way of the deal, which would include signing paperwork and getting approval from the Board of Supervisors.

“It’s pure dithering,” Rizzo said. “The city is at risk of losing a $75 million construction project.” This loss would also eliminate potential construction jobs, he said.

Other construction updates included news that the soccer field is expected to be completed by the end of July. All practical issues regarding its construction have been resolved, said Peter Goldstein, vice chancellor of Finance and Administration.