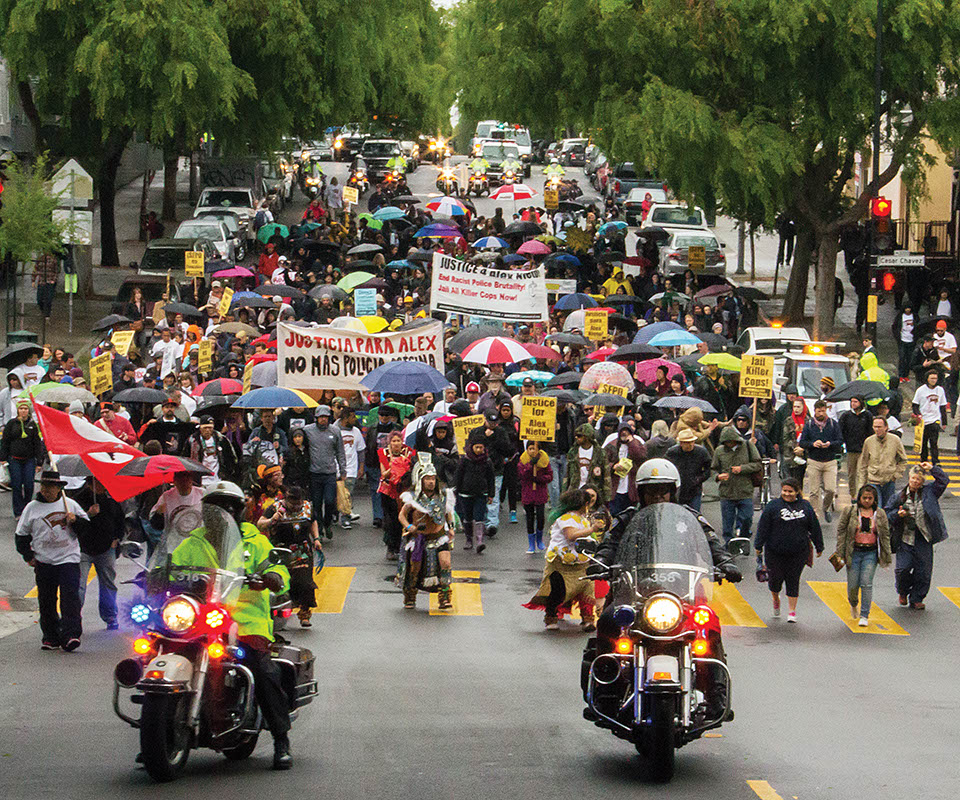 A recent series of questionable police shootings in the Bay Area has struck close to home with the March 21 shooting in Bernal Heights Park of City College student Alejandro Nieto.

San Francisco police gunned down the 28-year-old criminal justice student following a 7 p.m. telephone call from a neighbor reporting a man engaging in bizarre activity in the park.

Nieto, who was born and raised in Bernal Heights, was reportedly on his way to work as a part-time nightclub security guard when four officers confronted him, SFPD Chief Greg Suhr said.

Although it has been alleged that 14 bullets pierced Nieto’s body, Suhr would not confirm that statement. He said once an autopsy is completed he would release the results.

Three days after the shooting, a vigil for Nieto took place in Bernal Heights Park that attracted some 150 family members and friends. The March 24 gathering was a somber yet angry reaction to the shooting that included lit candles, singing, burning incense and Buddhist chants.

“He was never arrested in his life,” Sierra told the San Francisco Bay Guardian. “He wanted to be a good person, and he was.”

Nieto was a few units away from getting his associate arts degree. He was hoping to become a counselor working with troubled youth, friends said.

“I was making sure that his life was going in a positive direction, and what we saw in Alejandro was that he had a really big heart,” Avalos said. “He gave it to a lot of people, and often probably didn’t give it enough to himself.”

At the three-hour-long meeting, Nieto was described as “a good young man … with a loving spirit … who took criticism well.”

An elderly man who has been working in the Mission District since 1971 said, “Alejandro Nieto was a loving kid. He took criticism on the chin and he took it as advice and constructive. He was always yearning for knowledge. He would listen to his elders, take their advice and go in that direction. So, it sounds out of character for him to be pointing a taser at someone.”

At the meeting, Executive Director Joyce M. Hicks of San Francisco government’s Office of Citizen Complaints said her office “has already received a number of complaints about the shooting and her office continues to receive them.”

From the crowd someone shouted out, “I can’t imagine what 14 hot bullets feel like entering your body.”

Others in the audience answered by saying, “Overkill.”

“They fired in defense of their own lives,” Suhr responded.

The audience reacted with thunderous shouts directed at the chief.

While some people were in tears, others appeared frustrated and angry. Many in attendance were bewildered about the killing and still wanted answers.

Although Suhr was unable to answer a number of questions raised at the town hall meeting, he assured everyone that “when I get more information, I will give it to all of you.”

On March 29, some 250 people rallied in a peaceful protest against the Nieto shooting.

Protesters gathered in front of the Mission Cultural Center and spilled out onto Mission Street for the 2 p.m. rally.

Police had already cordoned off the street between 24th and 25th street and approximately 30 officers monitored the situation.

When the march began, the crowd, led by Nieto’s father and organizers, headed east down 24th Street to Folsom Street with a banner that read “Safety for Who? Rest in Peace Alex Nieto. Never Forgive, Never Forget.”

The marchers then gathered under cloudy and drizzly conditions at the makeshift Nieto memorial created in the northern corner of the park.

With somber faces and a few people crying, people gathered around the memorial site that ended with a few words about Nieto and a ceremonial indigenous blessing.

As everyone departed the 30-minute ceremony, they shook Nieto’s father’s hand as a sign of comfort.

The National Lawyers Guild was present, along with a number of grassroots organizers who said they were preparing for other actions sometime soon.

Adante Porter from the Oakland law office of attorney John Burris is reportedly representing the Nieto family. The legal firm handled the high-profile Oscar Grant case in Oakland. Grant was shot at point-blank range by a BART police officer in the early hours of New Year’s Day in 2009.

At press time, the San Francisco Police Commission had ordered multiple investigations into the Nieto shooting to see if officers used “appropriate force.” The involved officers are on paid administrative leave.

As expected, more than 100 turned out for Nieto’s wake on March 31 at Driscoll’s Valencia St. Serra Mortuary. Likewise, a standing-room only crowd was visible for the mass at St. Kevin’s Catholic Church on April 1 and at least 100 mourners were at the  Holy Cross Cemetery gravesite following the mass.