The cascading fog did not deter students of City College from gathering at Ocean campus’ Ram Plaza for the beginning of the “March 14th Walk-Out and March on City Hall.”

The city wide event called for students to walk out of their classes at 1 p.m. and join the Save CCSF Coalition, along with multiple teacher’s unions, endorsers, and students alike, in a march to Civic Center followed by a rally in front of City Hall.

Micheal Madden, sound engineering student and Save CCSF student organizer, was one of the many canvassers for the three-point petition proposed by the Coalition.

“We want to ensure Prop A funds are used for education as voters intended, fill any extra budget gap by [City Hall] advancing the funds to CCSF, and call the Department of Education to stop the Accreditation Commission’s unjustified Show Cause sanction against the school,” Madden said.

Coalition sentiment also seemed to lean on the actions and agendas of Lumina Foundation in its granting of funds to the Accreditation Commission for Community and Junior Colleges in order to restructure the priorities of institutions throughout the state.

Banners and chalk drawings on the plaza’s ground publicized the coming event, along with sign twirling from City College dancer and student Spencer Pulu. At 1 p.m., as a torrent of mist chilled the bones of the gathered few at Ram Plaza, the march began. The crowd climbed the stairs between Cloud Hall and the Science Hall, photographers scurrying ahead of the throng as well as bike-mounted protesters, who urged passersby to join them.

Chanting, “walkout,” and, “the students united will never be divided,” they waved banners and signs at the windows of each building they passed. Cars began to honk as the crowd reached the main roads, and it was around this time the campus police began their escort, tailing the protesters in their patrol cars until they entered the Balboa Park BART station.

The cross streets of Mission Street were subsequently filled with varied chants of “We want the money,” and its Spanish equivalent, “Queremos el dinero,” leaving several bystanders amused and traffic somewhat halted. It was at this point that the SFPD began to escort the protest, by way of patrol motorbikes and a police van.

The march paid a brief visit to City College’s Mission Campus, where many more people waited to support the rally and join in the march.

“We’re coming out here to gather. We’ve landed at Mission, later we’re going to Mission High School,” said Lalo Gonzalez, 24. “We’re gathering the students to get support to go to City Hall and demand that elected officials take a stand against the cuts, and force the state to actually fund the college as opposed to staying silent.”

The protest wasn’t relevant only to students in the higher education system, as attested by the many high school students who joined the march.

“I go to Terra Nova,” said Eric Suther, 18, rushing to keep up with the marchers and pass out flyers. “It’s in Pacifica. I think it’s really screwed up what they’re doing to City College.”

By the time they reached Civic Center, an even larger crowd was waiting for them in front of City Hall, who welcomed them with a fanfare of plastic trumpets. A wide diversity of students of multiple languages, backgrounds and occupations huddled together in front of a drum circle and an adorned Penske truck, which acted as a podium for the day’s events.

But the marchers weren’t immediately interested in the rally, with several leaders of the Coalition steering the march straight into the lobby of City Hall. 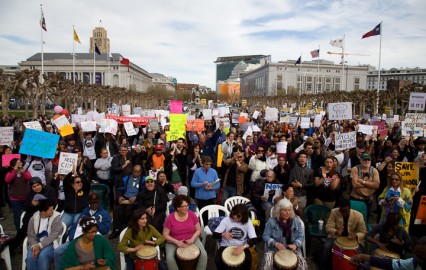 There, they demanded Mayor Ed Lee to come out and address the situation.

When no immediate response was given, the protesters left the lobby and joined the others in a rally in front of City Hall which included original music, dance, spoken word and heartfelt personal speeches. Trustee Chris Jackson gave his own impassioned address to the ralliers.

“I’m here to stand in solidarity with our communities, our neighborhoods, our residents, our students, to say enough is enough,” said Jackson.

The noise of protest continued on into the late afternoon, with no visible political response to the rally, as the sky began to gray and become populated with clouds. Arms grew tired and signs were lowered, but the energy of the demands lasted throughout the duration of the rally.

“I am demanding that the Board of Supervisors do what it is supposed to do,” said Dr. Espinala Jackson, a veteran of many similar protests, as she looked out at a thinning crowd. “We do not want to see any of the City Colleges close. We have been here too long.”

The rally ended at 6 p.m. with no reply from Mayor Ed Lee or any city-based politician.