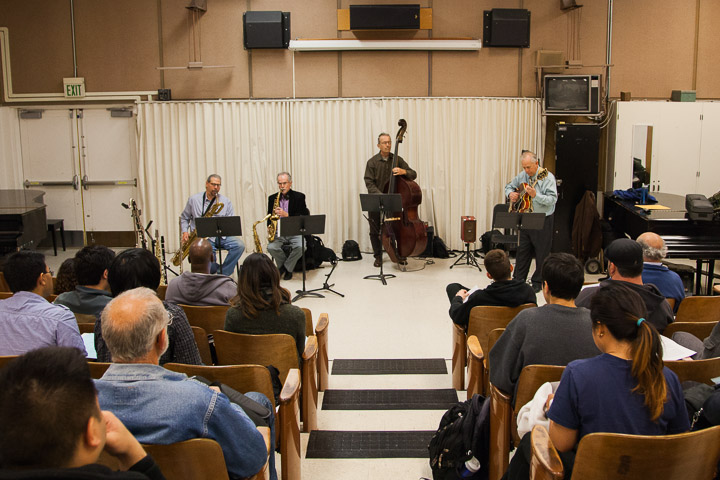 The sound of jazz music filled Creative Arts Room 133 on Oct. 10 as City College music instructor Lenny Carlson intoned the first notes of his 2002 “Yes I Do” to a group of 50.

Fellow musician Hal Richards said Carlson enjoys composing music when he isn’t teaching, because it allows him to show his creative side.

“He finds the delicate balance of teaching and being a musician,” Richards said of his long-time friend.

Four of the eight songs they played during the event were composed by Carlson.

He said he composed the song “Time and Space” to welcome Dr. Douglas Bish, the new Dean of Visual and Performing Arts, Journalism and Speech.

Bish was at the concert and watched with an ear-to-ear smile as the musicians played their hearts out.

The audience’s applause got longer and louder with each song played.

Students seemed pleased with the performance.

“It’s not the music I listen to everyday, but it was pretty awesome,” Carlson’s student Chris Pothong said.

Carlson says he is inspired by the courage and strength that his students demonstrate in spite of the many hardships college students endure.

“I have become a more focused and [an] efficient thinker and speaker thanks to my students,” Carlson said.

Carlson has been teaching in the music department at City College since 1998.

“I’m thriving at City College,” Carlson said. “The extreme diversity just works with me, and it’s a stimulating situation.”

Carlson currently teaches three guitar classes, ranging from beginner to advanced, and a History of Jazz class, which is designed to explore the musical heritage of African-Americans.

Carlson said his quirky sense of humor and his eclectic background work well with jazz music and for composing with the Cartoon Jazz Band, which plays the type of music people hear on Looney Tunes cartoons.

Carlson received numerous awards during his lifetime. The one he is most proud of is placement on the 1985 Grammy Award ballot for Best Jazz Instrumental Composition for his piece “Biff.”

He was awarded two Subito grants from the American Composers Forum who are devoted to promoting and assisting musical activity. Carlson also produced “Aluminum Sunset: A Tribute to the Music of Raymond Scott,” which premiered in 2011.

This November the Cartoon Jazz Band will perform in the Wellness Center on Ocean campus, which will include top local freelance musicians playing some of Carlson’s music.