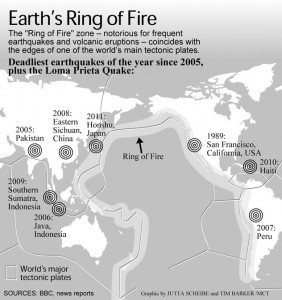 By Tony LeTigre
The Guardsman

There is a greater than 95 percent probability that an earthquake similar in size to the Loma Prieta temblor of 1989 will strike California within the next 30 years, according to the United States Geological Survey.

Such an event, however, would still pale in comparison to the 9.0 earthquake that struck Tohoku, Japan on March 11, and in the estimation of the USGS, it is unlikely that San Francisco will ever experience a quake of that magnitude.

A long stretch of the San Andreas fault in central California uses slow, gradual movement rather than building up energy to a large quake, according to Andrew Michael, a geophysicist who has been with the USGS since 1986.

The infamous 1906 earthquake measured 7.9 on the moment magnitude scale, which replaced the less-accurate Richter scale. It was also centered just off the coast of San Francisco, rather than 50 miles away as with Loma Prieta. But both of these events remind us that a quake well below 9.0 can be dangerous and destructive.

Seismology is a relatively young science, and most scientists are wary of earthquake predictions except over a wide range of time. This uncertainty, along with the fact that California and Japan are both part of the Pacific Ring of Fire, has led to speculation that the Tohoku megaquake could be the catalyst for a similar disaster here.

“Big earthquakes do trigger other quakes, but normally only in the same region,” Kate Hutton of the California Institute of Technology said. “The plates move along at their steady rate, and each individual section of the perimeter seems to have its own cycle of strain accumulation and release.”

Hutton said some seismologists have noticed that the largest quakes seem to clump in time – for example, Sumatra in 2004, Chile last year and now Japan – while “others attribute this to the statistics of small numbers, somewhat like the chances of throwing three heads in a row.”
She said the main expansion in seismology over the last decade has been the huge increase in computing power.

“This applies to data collection, management and analysis as well as numerical modeling of the physical processes, usually on a supercomputer,” Hutton said.

Since the ability to predict a tremor well enough to offer immediate advance warning is still distant or doubtful, experts say the best thing to do is prepare for the inevitable.

“Most people go through life in denial when there are a number of relatively simple things you should do to prepare yourself and others,” City College earth sciences instructor Darrel Hess said. “Make sure your water heater and large appliances are strapped down and secured. Have an emergency preparedness kit. Keep a flashlight by your bed, and a supply of food and water on hand. Talk to your neighbors, and prepare as a community.”

“The buildings were fine, and we don’t anticipate great problems in the event of a quake,” Liggett said. “Any time you’re on a higher area like a hill, you’re on bedrock, and that’s going to be safer than a sandy area or one that’s fill.”

Kim Aufhauser, director of emergency planning and preparedness at West Valley-Mission Community College District, will take part in a private response training seminar for City College staff this month on the Ocean Campus. He said preparation is a gradual process that starts now, adding that his message is not one of fear, but of risk assessment and management.