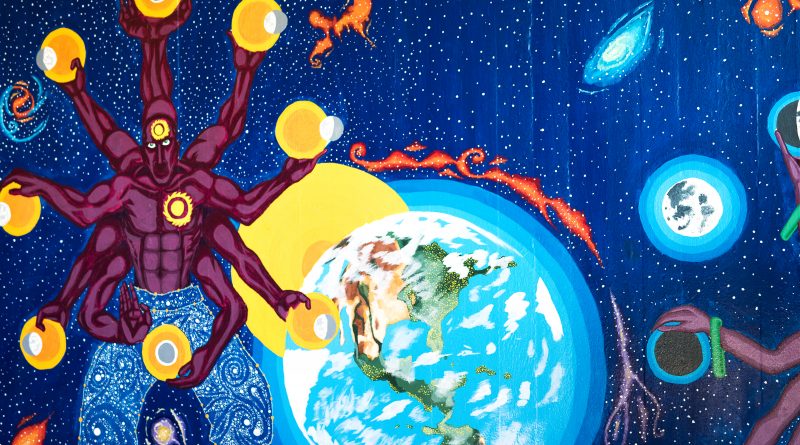 On each floor of City College’s Rosenberg Library sit the diverse,  striking art exhibitions of Reference Librarian and Library Exhibition Curator Kate Connell, each celebrating the ethnic history of San Francisco’s neighborhoods. For one day in September a lucky group were able to tour the neighborhoods that had inspired the art, with many of the artists who had created it, on what Connell titled the “Moving Art House.”

Until Nov. 2, “Bling Blang, You Bring the Hammer, I’ll Bring a Nail,” an exhibit gathering artworkers’ pieces from throughout Southeastern San Francisco will be featured along with “Cutting the Rug,” a selection of nightlife photos chosen in collaboration with the Journalism department; and “Digging In,” a celebration of our shared green spaces created with assistance from Youth Art Exchange, are on display.

On Sept. 23, the public had the opportunity to join Connell in exploring the third annual Moving Art House, a light-drenched tour of hidden and public treasures in Southeastern San Francisco and the result of 20 years of assembly by Connell and her collaborator Oscar Melara. A variety of community members and art lovers alike joined the tour and met three of the key artists with works currently displayed in the Rosenberg galleries.

Outside the library, we piled into the crowded-comfort of Richard Talavera’s sun-dappled and art-festooned “Mexican Bus,” where freshly cut bell peppers framed the musical accompaniment of local Italian mandolinist Trio Pizzicato and Latin American band Familia Pena-Govea’s playing was punctuated by the chopping of radishes on a wooden cutting board and our convivial chatter as the bus rolled along.

Our first stop was City Arts and Tech High School, where famed muralist Matt Christianson, who has led over 30 student collaborated mural projects, greeted us. We walked through the halls and classrooms of a school almost entirely covered with art. Christiansen has led his students to create pieces that are by turns, political, mystic, comedic, and all singularly excellent. A reproduction of his Excelsior neighborhood library wall mural currently hangs in Rosenberg Hall.

“This is a place for young, newly-minted artists to get their training,” Connell said “Matt is a teacher and he’s also active in the neighborhood, painting murals. He’s very much rooted in the Excelsior.”

As the bus passed through the Sunnydale Development housing project  Neo Veavea, a storyteller, actor and visual artist spoke of growing up in the aging structures and the fear many have of leaving poverty in spite of the hardships of a lifetime there.

“The tour is almost a visual statement of what’s happening in our community….My art is a form of release, self release. This is internal,” said Veavea, whose self portrait also hangs in the library.

Later in the tour, Sarah A. Smith, an artist specializing in depictions of “literal and metaphorical nature,” took the group through six blocks of the Visitacion Valley Greenway.

The Greenway was given to community gardens, parkland and neighborhood agriculture after 12 years of local rejuvenation effort.

“It represents what the southeast is about. We don’t get much help from the city, but people are willing to go to great lengths to make their vision happen,” Connell said.

The tour stopped briefly at the house of Juan Fuentes and his wife, Michelle Muton. Fuentes was a linocut and poster artist of the Chicano Poster movement.

Guests were offered watermelon and cake as Fuentes took small groups into his studio to view his work, including a piece for the Poster Syndicate, “Fight White Supremacy.”

Fuentes shared his experience from August’s “Unite the Right Rally” where he drew an enormous Confederate battle flag on the ground “so that everyone had to step on it.”

Lastly, the bus stopped at a building on Cambridge and Silver, the immigration and naturalization service building from 1940 to 1942.

“We found records of Asian Americans, primarily Chinese, Polish, Italian, and German immigrants, who were briefly interned,” Connell said. “It was a surprising variety.”

Singer and songwriter Johnny Escobedo was commissioned by Moving Art House to write an original song describing five Latin American immigrants’ stories. “He sang to the building in a way that was really moving,” Connell said.

A closing party will be held Nov. 2 from 5-8 p.m. in the Rosenberg Library. Connell wishes to celebrate “how effective it’s been to put people in touch with each other in a region where we have so few cultural institutions,” and she considers City College a “vibrant and powerful” example.

“In the end, collaboration is what it’s all about,” Connell said.