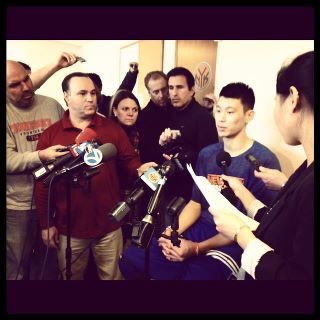 Jeremy Lin, a point-guard for the New York Knicks, has had a memorable week. After he started this season as a bench player, he scored a career-high 25 points against the New Jersey Nets last week, cementing his spot in this weeks’ starting lineup.

He displayed another career-high performance this Friday, when he scored 38 points against the Los Angeles Lakers. This game was nationally televised on ESPN, and around the world—i.e: China, Taiwan and the Philippines.

But Jeremy Lin appeared unfazed by the recent media attention. A New York reporter asked him whether he was overwhelmed by the “lin-sanity.”

“Uh yeah,” he responded. “But when I get on the court, none of [my teammates and I] are thinking about all this. That’s just basketball to us.”

Another reporter asked whether he started looking for an apartment. “Maybe,” he said.

Lin concisely answers the local media’s questions, going straight to the point without setting up his responses. This mentality allows him to decide how he wants to elaborate on his points, while helping him manage the surging media attention.

Lin’s media responses may prompt the New York Media to generate follow-up questions, but Lin ultimately decides how he wants to answer these questions.

He chose to directly address the media.