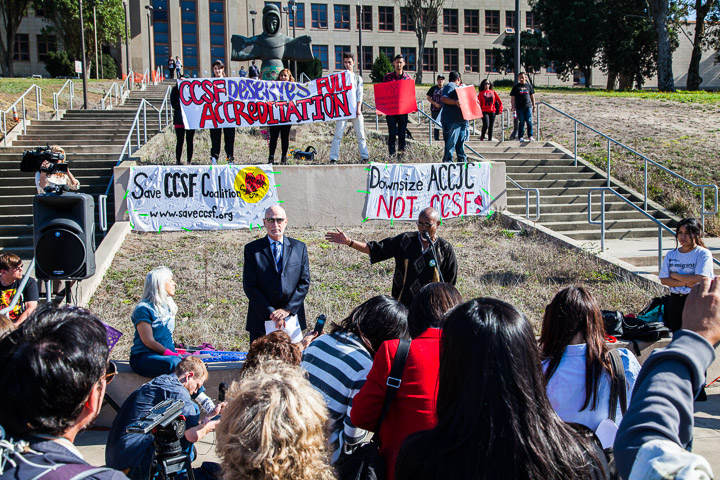 The Save CCSF Coalition held a press conference on the steps of the science building on Ocean campus Nov. 7 to announce the lawsuit they filed against the Accrediting Commission for Community and Junior Colleges with their attorneys Dan Siegel and Neil Satterlund.

The lawsuit, called a petition for a writ of mandate, requests that the Superior Court review and reverse a decision made by the administrative agency.

“Our rationale for this lawsuit is that the ACCJC operated in violation of laws and regulations issued by the U.S. Department of Education that are supposed to guide its deliberations,” Siegel said.

Within the text of the lawsuit, written statements from petitioners who are students, faculty and staff describe reasons the court should consider reversing the commission’s decision.

Siegel said this lawsuit is unique because it brings the voices of students, faculty and staff to the table, and may be faster and more effective than the other suits.

Satterlund said that he has found six cases where a petition for a writ of mandate was used to challenge an accrediting agency.

“In all cases, the courts were willing to strike down the [agency’s] decisions … the schools won,” he said.