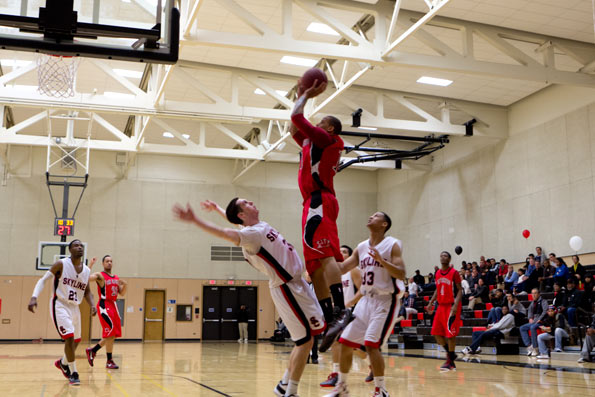 Last season, City College ended the year on a 27 game winning streak, winning the state championship. The 2012 season is a different team then last years squad, but they are piling up very similar results as the Rams ended their regular season on a 20 game win streak, defeating Skyline College 105-52 at Skyline on Feb. 17.

The Rams are now awaiting their seed in the NorCal Playoffs, but are expected to be the number one seed overall in the North bracket.

Head coach Justin Labagh reflected on his teams season and explained that the winning streak really doesn’t mean much to them.

“We’ve worked hard and we should get the number one seed, but if we don’t it doesn’t matter,” said Labagh. “We put ourselves in position to be in position to have three home games and that’s what we wanted to do. It doesn’t matter how many games we have won now in a row, can we win the next one.”

City College returned six key players from last years championship team, but their head coach knows this years team is not the same as last years.

“We’re a completely different team, but I think that we are deeper this year.”

His teams depth was on full display when they played Skyline, as five players reached double figures lead by sophomore Raysean Hariston with 21 points.

“I feel good, we practice hard everyday and It’s that time of the year where we are right where we want to be at,” said Hariston. “We’ve been playing hard, playing together, and playing well as a team.”

The game was never in doubt, as the Rams were able to jump out to a 23-6 lead in the first seven minutes of the game. Sophomore Myron Respress had a couple of easy tip-ins in the first half as him team went into the locker room up 56-30.

“It’s basketball, I just try to do what I can, do what I know I can do best and just get to those loose balls,” said Respress who had 11 points at the half and finished with 13.

Respress along with Hariston and several others, won the state championship last year and Respress was asked about trying to duplicate their success they had last year.

“I don’t want to compare the two teams, I played on a great team last year,” he said. “We did great things last year, we were the number one team, this year we got a nice new group of people and nice new team. If we keep playing like this and play the best we can, we can win state.”

Two new faces on this years team that has contributed to the teams success include freshman Delon Wright, who is averaging 11 points-per-game on the season and is shooting over 57 percent, and 6 foot 10 center Gabriel Aguirre from Brazil, who has provided size underneath and can strech the floor for a big man, hitting two three pointers in the teams win over Skyline.

The CCCAA NorCal Playoff seeding will be announced next week. City College ended the season tied with Citrus College for the number one ranking in the state polls.