All it takes is one crazed individual to turn a peaceful campus into a killing zone. We must have armed campus police to combat and prevent a massacre.

Tragedies at UC-Santa Barbara and Virginia Tech in the past decade are reasons we need armed officers. We need a way to deal with dangerous people who want to inflict violence to our City College community.

Our campus police, armed with only a baton and pepper-spray, are practically useless when faced with a subject with a gun. Can you imagine un-armed police officers responding to a campus shooting? Campus police can’t do anything about a shooting anyways. They must call the San Francisco Police Department when a person with a weapon is reported.

Between 2009 and February 2014, there’s been 37 incidents where SFPD officers responded to persons with weapons at City College, according to a San Francisco Examiner article.

If someone has a lethal weapon, campus police need to be able to respond immediately and not waste precious seconds or minutes waiting for SFPD to arrive.

We have 28 officers on the police force, they need to be armed and trained extensively in the event of a school shooting. 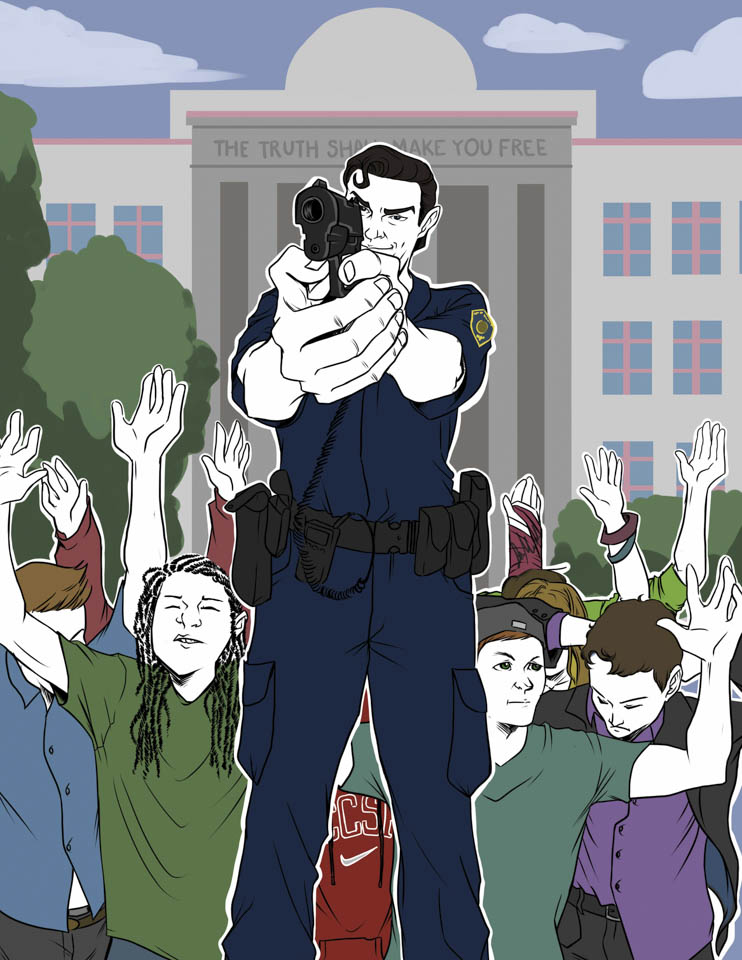 Officer brandishes his gun around students. (Illustration by Serina Mercado)

Arming campus police is an accident waiting to happen. Don’t arm them.

By Elisa Parrino and Charles Innis

City College student Alejandro Nieto was murdered by police officers on March 14 of this year.

They described Nieto as “acting erratically and threatening passersby,” quoting an an unnamed source that described him as waving a “pistol-shaped stun gun” and “yelling profanities.”

The SFPD jumped the gun and shot Nieto once tensions were high. Nieto was not armed with anything lethal. It did not have to happen that way.

Imagine if this scenario occurs on campus?

Only last semester was there a major police-involved protest in which students were injured once tensions exploded.

No matter how much training an officer may receive, they cannot be stripped of their human error.

People are emotionally charged. If someone, policeman or not, feels threatened by an unknown force, they will react with as much force as they find necessary in the spur of the moment.

This is how unarmed teenagers are shot. This is how Alejandro Nieto was shot.

Guns are not natural things, they are incredibly dangerous and powerful. Give a human being, with all of their hubris and error-prone sense of perception a weapon of power, it would be ridiculous to believe they wouldn’t possibly abuse it.

The people that commit these homicides, such as the Virginia Tech and UC Santa Barbara shooters, do not care what happens to them. They had indiscriminately gone out and shot innocent people regardless of whether police were there or not.

If we want to keep this from happening, these psychologically disturbed people need to be helped before they lose their mental ground. These people should have been given psychological care far before they committed their crimes.

Not to mention that guns should not be so easily given out to people that could have unstable backgrounds.

We are basing our decision on arming campus police off of tragedy. What crimes  and violations usually occur at City College? Phone theft, illegal parking and smoking in undesignated areas. Do any of these need lethal enforcement?

Let’s keep our relationship with campus police mutual and respectful.

If we give them tools of power that might tip the scale towards their side, this relationship will get agitated.

No violence on campus means no violence from any side. We’ve been fine without guns for CIty Colleges 80 year life-span, why start now?