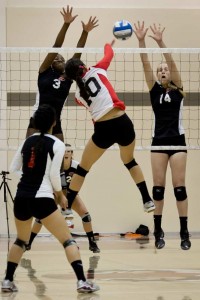 There was a lot of hype going into the match-up between the top two teams in the Coast Conference as the Rams (17-5, 7-2) faced off against rival Foothill College (16-5, 8-1) to inch closer to the top.

With one single play, outside hitter Nicole Yap, changed the face of the match when she hammered three straight kills in the third game to take a commanding lead that would eventually propel the City College to a five game victory 23-25, 25-20, 25-18, 20-25, 15-7 at the Wellness Center on Oct 28.

Then with the series tied again at 2-2, City College took an early lead in the fifth match and never looked back when Yap collected two aces ending the match on an 8-0 run. She finished with a team high 18 kills and three blocks.

“It was definitely our biggest win of the season because we were looking for our revenge win,” Yap said. “It’s a major boost to our confidence. We are like a whole new team after this win.”

Earlier in the season, City College was handed one of its only two losses in the conference when they lost to the Owls in Los Altos Hills on Oct. 7.

Foothill came into the match undefeated in Coast Conferences matches and Rams head coach Saga Vae said he knew this win was important to gain momentum as they head towards the end of the season.

“This was a big win,” Vae said. “We have the talent, we just need to have everyone on the same page, healthy, and reaching our goals day by day. I think we have been doing that this whole second half of the season.”

While Yap was a dominant force next to the net, the win took a total team effort. Setter Christina Lopez finished with 56 assists and sophomore libero Crystal Lee made 39 digs. Middle blocker Romona Vae also contributed with 11 kills.

The Rams next game will be against Skyline College in San Bruno on Nov 2 before they go on to play the No. 2 ranked team in the state Cabrillo College on Nov. 9.

Outside hitter Christina Lim will not be available for the game against Skyline having suffered a sprained knee and will be out for at least 7-10 days.