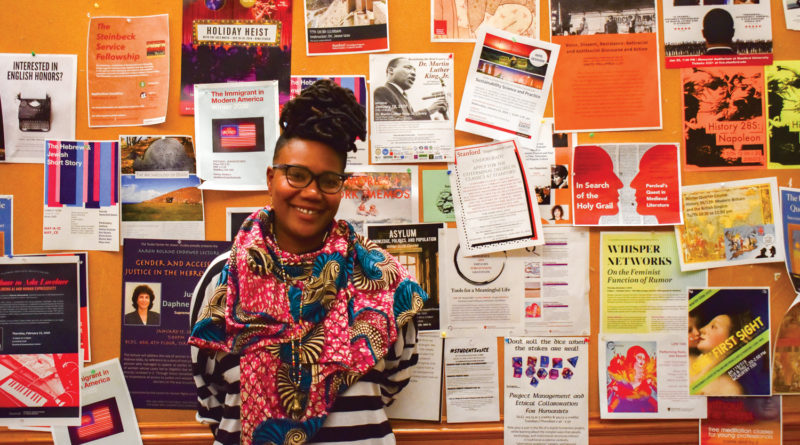 Over the course of her teaching profession at City College, former African American Studies department chair Aliyah Dunn-Salahuddin would tell her students, repeatedly, to utilize their education to attain institutional power. She often emphasized how in order to make a change they have to become entities within their governments, academic institutions or corporations.

But even for her, it was difficult to leave her comfort zone at City College and apply to Stanford.

She found her niche in San Francisco, serving as a college department chair and securing a downtown apartment for more than 18 years. However, after teaching at City College for eight years, she was unhappy.

“The fact of the matter is that I was a woman leading a department, who was getting paid less than everyone else,” she said. “That’s a fact because I didn’t have a Ph.D.”

“How could I be teaching about decolonizing the mind, but yet I am living in fear by not pushing myself to my fullest potential?” Dunn-Salahuddin said.

In due time she overcame her fears and listened to her own advice. She refused to sell herself short in her pursuit for a higher education.

Her acceptance came with a whirlwind of emotions. She recalled teaching a lecture at Cloud Hall when she received the news of her acceptance. Although her overwhelming feeling of joy soon turned into doubts as to whether or not she would survive in an elite academy.

She overcame her fears and accepted Stanford’s doctoral program to further her research of the Bayview and Hunters Point 1966 Uprising, and San Francisco’s history as a whole. However, with her acceptance meant leaving her apartment in downtown, the students at City College, her family in San Francisco, and all things familiar to her.

The transition into her first quarter was met with challenges, such as experiencing racism from campus police while she was working late one night. “They did not talk to me. They just shined their lights on me, and where I come from when law enforcement shines a light on you it is not a good thing. So here I am being criminalized in a place where I should be protected. You do not know how deeply internalized these ideas are. Even I, African American Studies Department Chair Aliyah, felt like I did not belong,” Dunn-Salahuddin said.

In addition to being racially profiled she had to overcome a symptom called imposter syndrome. Imposter syndrome is defined as a collection of feelings of inadequacy which persist despite evident success. She said how during her first quarter she felt similar to her students, who received their paper back with a series of remarks. The critiques made her feel inadequate as if she did not belong at Stanford.

“The doubt I felt in myself and my self-worth was my own worst enemy, but I am trying to produce history. Stanford is trying to level you to a certain place beyond teaching history. This is about me creating history, so when students research Bayview Hunters Point or San Francisco there will be historical evidence for them,” said Dunn-Salahuddin.

Overtime her lows became highs when she was offered to teach a panel titled, Nothing to Lose but Our Chains: the Black Bay Area and Beyond, at Stanford. The ability to conduct a panel came as a surprise to her peers.

“What I was doing was probably hard for other graduate students, who came from a place of privilege where they are acculturated more than me. There are so many people, who are interested in history they never heard of. So hopefully my presence is making people aware of the richness of our local history in San Francisco,” Dunn-Salahuddin said.

Dunn-Salahuddin will also be teaching a class relating to her chapter titled, A Forgotten Community, A Forgotten History: San Francisco’s 1966 Uprising, from the anthology titled “The Stage Careers of the Jim Crow North.” Her chapter is a historical overview of the events leading up to the 1966 Bayview Hunters Point Uprising as well as the activism of local community members against the forces of Jim Crow in the North, according to San Francisco Public Library.

After she obtains her doctorate she hopes to build a bridge between City College and Stanford.

The metamorphosis of Dunn-Salahuddin is self-titled as Aliyah the Scholar. No longer will she be called Aliyah an amateur historian she was once labeled as.

“After I graduate I will be called Dr. Aliyah Dunn-Salahuddin, scholar, historian, and activist,” Dunn-Salahuddin said. “I want all the doors open for me without the glass ceilings and limitations. Once I get through this rigorous process then nobody could question anything anymore. I want institutional power to tell our stories with authority.”

She closed the interview with a message for City College students as to not sell themselves short and to pursue what is best for them. In regards to the current relationship between students and administration she mentioned, “Faculty voices only go so far. Students need to speak up and fight for what they believe in. It was students, who 50 years ago changed the course of education. But more importantly, I want them to succeed so they can be in positions of power to create the change in the institutions. Become the chancellor, become the teacher, become the politician. That’s my hope.” Dunn-Salahuddin said.