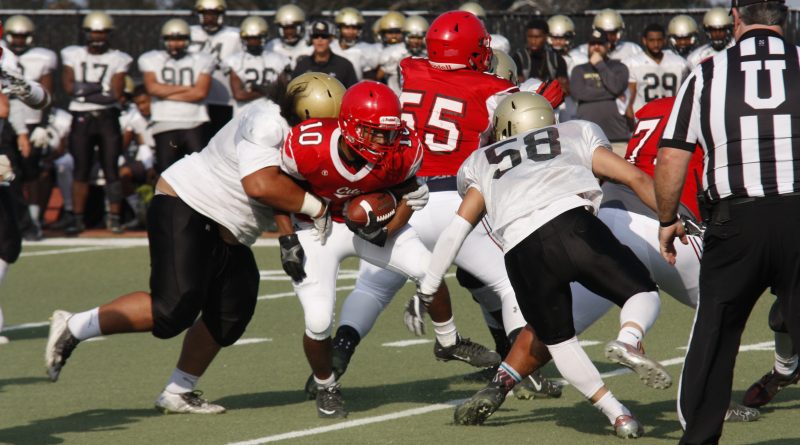 The Rams start their 2018 football season with the same goal they have every season, win the state and national junior college championship. Last season they came up short, finishing the year 8-3, but with loads of young talent the Rams are aiming to finish better this season and be in title contention come December.

“Every year we enter with the goal of winning a state and a national championship but every year is a brand new team and you have to start from scratch. We have the work on basic fundamentals and on the foundation of how we play football here at City College,” head coach Jimmy Collins said. “Where we are at with this team is that we have a bunch of guys who have really bought into how we do things here and that is keep it simple, playing really fast, and don’t underestimate the value of playing harder then your opponent.”

“This is the best group of high schoolers I have brought in since I became head coach,” Collins said. “Hands down. Seventeen of ours guys of from outside of California but the rest our mostly Bay Area guys, it is a very Bay Area rich team. I am really excited about all of them. We are going to have seventeen freshman starting.”

With the graduation of Zach Masoli the Rams now have an opening at quarterback. Freshman Jack Newman, a local product from Analy High School in Sebastopol, will start in the opener versus Sierra College and looked sharp during the teams scrimmage against San Joaquin Delta on August 22. Newman showed a more than competent grasp of the offense and got to show off both his legs and arm during the scrimmage. Newman looked comfortable under pressure and was not phased when the pocket broke down and was forced to scramble and complete passes on the run.

“Jack has a lot of great physical attributes and intangible qualities. He is very smart and instinctive, is very poised, and has great command of the offense and has the respect of everyone not just on the team but also in and around the program. That is a real solid building block for a championship team,” Collins said.

Joining Newman in the quarterback room are fellow freshmen Ethan Bullock and Kyle Mazzone. Newman might be the opening day starter but Collins has high hopes for both Bullock and Mazzone.

“It’s not just Jack,” Collins said. “We also have some other high Division 1 quality players in the quarterback room. The room that we have is a fantastic foundations to have for our team. I would go against most Division 1 teams with the quality of our room.

Besides some costly penalties, the Rams looked sharp and made explosive plays on both sides of the ball. No score we kept but to the eye the Rams were clearly the superior team. The penalties come with the territory of having a young team, and the Rams are especially young. Seventeen freshman will start the season opening game against Sierra.

“Like a lot of junior college teams, most teams are at least half brand new, but were more like four-fifths brand new,” Collins said. “There will be some learning curves but our mentality is that we want to be a strong team come October and November and be poised to play in December. During the month of September there is going to be some trials and tribulations and situations that guys haven’t been in before and I think our coaching staff is prepared to teach these guys”

The Rams do have some veteran talent returning and coach Collins thinks they can make a major impact. Dominic Stellin-Splan, a massive nearly 300 hundred pounder center is returns to anchor the offensive line while on defense defensive end Tuvi Tulitasi and lineback Anthony Porter hope to sow chaos into opposing team’s backfields all season long.

“The defensive line is the strength of this football team,” Collins said. “They have the most experience of any group, they have a lot of sophomores along with some dynamic freshman. They are Division 1 loaded.”

But the returning player coach Collins seemed most hyped up about is DeShawn Collins. Collins started the 2017 season out as the starter but got injured on the opening drive of the opening game against rival Laney College. In Collins absence freshman running Isaiah Floyd stepped up and had an outstanding season and ended up breaking the City College single season rushing record with 1797 yards, earning himself a scholarship to continue his career at Arizona State.

“Everyone knows the Isaiah Floyd story, but what gets lost in the mix was that our opening day starter was DeShawn,” Collins said. “He was looking just fantastic before he had a season ending ankle injury on the opening drive. This year he has looked fantastic through camp and he is poised to be a pretty special and dynamic player himself.

Frank Hall returns as the leader of the wide receiver unit. Although small, only 5’9” 170, Hall is a dynamic playmaker capable of burning past corners. In addition Hall is highly agile, and is a great route runner. Twice in the scrimmage against San Joaquin Delta Hall caught touchdown passes from Newman but both times were called back because of penalties.

Not every position has the starter penciled in yet. Coach Collins said there are still battles in the secondary but feels confident everything will sort itself out. New hire Kevin Almlie will coach the secondary.

Joining the City College coaching staff is alumni Larry Grant. Grant played linebacker and was the 2005 Junior College player of the year and after his stint at CCSF played at Ohio State for two seasons and then played seven seasons in the NFL including for the 49ers. The Santa Rosa, Ca native will join the Rams staff as a running back coach.

Replacing strength coach John Balano, a beloved figure in the program who tragically passed last December, is Abe Munayer. To honor Balano the Rams will wear a sticker on their helmet this season.

“Who knows where we will finish at the end of the season but I think we have a pretty dynamic group and I can’t wait to see them develop,” Collins said. “But I think this team is prepared to win and do whatever it takes. Could there be potential setbacks along the way, perhaps, but if we execute the way we can we will beat anybody there is.”